I know our anniversary was a paper one, but no paper was exchanged. Actually, no presents at all.

It is not that I wanted anything, but if I really had time (and really I should have), or the forethought to do it, I would have and should have done something for 710.

As it turns out, he did something for me.

One of my bigger beefs was getting no wedding cake for when we got married.  I mean, I love the man, but I love dessert more equally.  Yes, it was pouring the day and night before our wedding, so instead of going to Georgetown Cupcakes as planned, Becky 710 and myself ended up getting toffee covered pretzels (which btw, were amazing!) and sitting around our hotel room. We opted not to trek down to G-town after we got Becca to the airport after the reception.

But 710 surprised me on our day with this 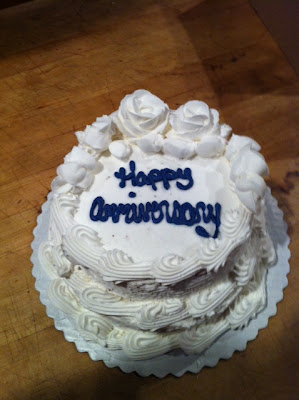 He was so great, he didn't even get it off a bakery shelf, but had it made.  A small cake with two tiers.  It is my understanding that the person taking the order didn't really understand what he wanted, but the person who presented it to him said, "oooohhhh, what a cute cake!".

Tonight it is our anniversary dinner - two days after the fact.  I'll fill you in on that, unless something more interesting comes up.  I'm sure it will.  You don't really want to see another post about food.

Song by:  Gram Parsons
Posted by Blobby at 5:43 AM

YUM. That cake looks delicious. And 710 gets serious points for having it made for you! What a sweetie.

awwwwwww! I never realized you didn't have a wedding cake until now. I hope it tasted as sweet as it looks!

That's a great post and put a smile on my face this morning. I wish I could share your enthusiasm for cake. My other half loves cake too, but I'm more of a pie and pastry kind of guy.

Maybe I could get an anniversary canoli??? Actually that sounds downright dirty now that I've typed that.

That 710 is a keeper. Maybe we'll find the perfect wedding gift for you two by your 2nd anniversary. Hope you boys have a wonderful dinner tonight. Love you!!

I hope the next year is the best one yet.

Unlike BosGuy,I DO share your enthusiasm for cake. It's a big part of any kind of celebration around here. Congrats on year one. May there be many more.