Actually it was 11 years ago today that Becky and Andrew got married.

...that would be be best of times portion of our show.  But if you subtract 11 years from today you get 2000.  This would be 5 days after the 2000 presidential burglary election, ergo, the worst of times.

Still, it was a great weekend.  Denton and I went in a day or two early so we could have dinner with the happy couple.  We gathered friends from the airport when needed.  Since I was a bridesmaid honor attendent (no dress, and certainly no explosive bowel movements at the bridal store!) I also planned the rehearsal dinner.  So much to do - including a little sight-seeing with the gang including the Jefferson Memorial, the White House, and a stroll down to Georgetown to pic up our tuxes.

I won't go into the drinking, the passing out, the passing gas stories.  Let's just say, we still talk about them to this day.

Even at the bridal luncheon we saw Patrick Moynihan, which was one of the highlights of the trip. Some people fawn over celebrities, I'm good with a solid political sighting, as long as it is someone I respect.

But the Bush-Gore tussle over Florida is almost a mere memory and normally I don't associate it with Becky's wedding.  Though at the time, the best man (I was probably the best man, I just didn't have that role per se!) was almost a no show as he was in Florida helping with the recount.  He made it and I was relegated to holding the train of the dress.  {sigh}

There were a lot of laughs though.  Jon made us bring a few pictures each from our past together and we all sat around our hotel rooms just chuckling at ourselves.  It was a great idea and now that it is 11 years later we should probably do that again sometime soon.

Jon brought one of Morty, Becca and myself in 1991 while we were all in Houston, and we opted to re-enact it here.   Asian Blobby - again.  Morty and I are the ones without juice cans or brushes stuck in our hair. 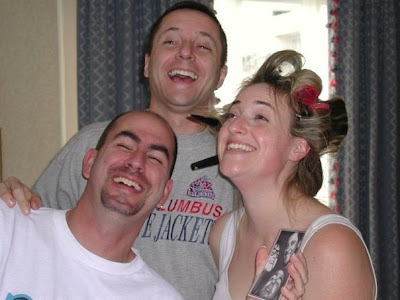 Oh, it was a weekend of laughing and drinking too much - which pretty much sums up every weekend I have ever spent with these people.  It is amazing we all haven't had liver transplants.

How is it that original picture - taken in a photo booth is 20 years old????  It is unfathomable.

The plan was to spend the day and weekend with them in Provincetown.  They are going.  We are not.   Boo.

I just flew back from the west coast - and just landed got home and began this post.  Work got in the way.  Hell, today was supposed to be a PTO day and I don't see that happening either.  Too many emails to get to and clear off.

I'll miss not being with them on this day - their day.  But they are both so great and there are so many fab memories of that weekend, it's just fun to yak about.

Here is on more pic for the road and it is one of my favourites of all times - the pic and the couple. I hope they don't mind me posting it. 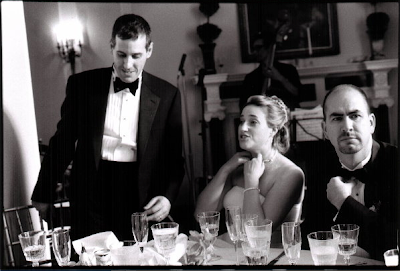 I'd say "I dress up nicely", but I suppose the picture and the day wasn't supposed to be about me. But, I mean really, isn't it?

Song by:  Rufus Wainwright
Posted by Blobby at 8:46 AM

OMG yay!!! I LOVE that pic of you -- in the original you can see better that you're pointing at me and making your WTF? face. PERFECT.

It was a great day! You're kind not to point out that the bride and groom passed out before the party was over.

And you organized one mean rehearsal dinner. In Chinertown!! So sad you couldn't invite spouses. ;)

Happy Annie, Schamesses. Thanks for helping all of us relive the day, Blobby. I think you should have posted the "orange" photo from the rehersal dinner. Your readers want to see your smile.