So maybe this time I don't show you something from a grocery store - which is my norm Shopping with Blobby segment.

I fly a lot.  I think you all know that.

What I rarely do when I am in an airplane is pick up and look through the SkyMall catalog.  Talk about a bunch of crap, not only do you not need, but that you then have to order and wait for delivery.

At best, most of these items, while not cheap, are impulse items.  Who is really buying a doggie staircase at 35,000 feet?  Do you need Hermione's wand that badly during your layover?

But last week this did stop me dead in my tracks as I flipped through between Houston and Los Angeles: 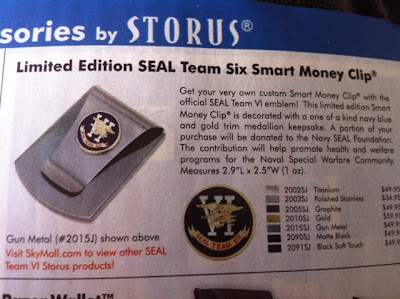 Get the money clip that killed Osama bin Laden !!!!   Or something like that.

Did Navy Seal Team 6 really carry around rupee in case they needed to hit 7-11 for some beef jerky after offing the head of Al Qaeda?

I get that for a decade bin Laden was Enemy #1, but really???  Celebrating his planned assassination with merch?  Even that seems unseemly to me.  And at the price of somewhere between $35 and $60?

For g-d's sake, it's not even Hammacher Schlemmer.
Posted by Blobby at 6:32 AM

I'm always amazed at what's in that catalog. I find it very interesting buy mostly unnecessary. It's a fun way to kill 10 mins.