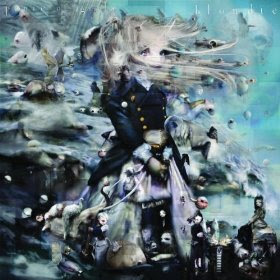 I'm a little late to this review.  I'm a little late to a few. I have the Record of the Month posts mapped out for this and the next three months - at least.  I doing this only once a month, these last few months have had a few new releases I'm trying to get to.  Eventually.

Blondie stands, to me, to be one of the better and more consistent bands out there.  "Consistent" might be a correct and yet incorrect description.  Their band members have changed over the years - though they still have a core of four since 1978's Parallel Lines.  They have rarely put out a similar album twice - and except for their first two releases, they've never put out two that are alike in a row.

Their first album in seven years, Panic of Girls, is no exception.

I haven't bought a physical CD in years - mostly because I don't have anything readily to play them on, but really - where does one buy them in the first place?  But don't look for Panic on iTunes, the download was only available at amazon.com.

Panic of Girls is good, but it's not superb.  I guess, that could accurately describe their last three disks - No Exit, the Curse of Blondie and Panic.  All have strong tracks, but those are not necessarily outweighing the weaker ones - and unfortunately, there are weaker tracks.

Back in the day (yes, I said that phrase), the band didn't really have weak tracks.  I don't think I'm waxing with nostalgia either, but maybe I have no perspective either.

Panic has too many Calypso/ska/reggae songs.  Or as my friend Jon put it:  "Look..you had a huge hit with the ska/Caribbean "The Tide is High" so STOP recording songs just like that...it was a fluke!"    That made me smile when I read it.  But he is correct.  With  "Girlie Girlie" "The End The End" and "Sunday Smile" it is too much for me.   ...and apparently for Jon too.   Not only is it too much, they're not even good.


Jon is also correct in his assessment that "Le Bleu" is awful.  I'm going on record by adding "China Shoes".  I like the music, but not the lyrics.  The first few lines reminded me of a song in Glee they tried to "write" called "My Headband".


I am not surprised by Jon's take on these at all.  We bonded over a lot of things decades ago, and Blondie was one of the first of those.  We have mostly been on the same page with their music.  Including the good.


Debbie's vocals aren't extremely strong.  It could be argued they never were, but the material used to really wrap around those, versus the other way around.  With Panic, that marriage isn't always there.   ....and she is now eligible for Medicare.  That was painful to think, say and write, but a 66 year old's voice isn't going to be as strong as it was when she was 30.


Still, I like Blondie's energy and their desire to keep plugging away and not resting on their laurels.  It's not an out of the ballpark disk, but it is solid and that's saying something.
Posted by Blobby at 6:50 AM

Love Blondie. one of my all time favorites.

I was not aware Blondie was still around!