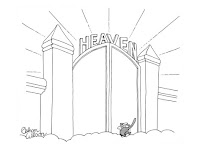 How how I love the likes of Dear Abby, Ann Landers and Ask Amy.  At least I can say I've met Amy Dickinson, but before she had her column, when she was doing (and still occasionally does) an NPR commentary on All Things Considered.

Reading the letters published in those columns, one would think most the people who write in have zero common sense.  These people ask the most obvious and sometimes dumbest shit there is known to mankind.

Occum's Razor would suggest that is because they are dumb shits (is that supposed to be one word? It didn't look right when I typed it.).

The other theory (well, mine) is that these letters - or at least some of them - are made up by Abby and Amy's staff members.  Totally fabricated.  I'm told by Amy, via Becky, that they are indeed real.  I am not holding my breath on this.

On days they are not making up letters, at least Abby has readers writing in their responses.  It's what I call "coasting" so "she" doesn't have to be bothered dolling out questionable advice that Mary Worth could do in her sleep.

I do read Abby daily since it is right next to Speed Bump, Bizzaro and Doonesbury.  Notice I didn't say Sudoku, the NYT crossword puzzle or Jumble.

Normally, I read the questions, but not the answers because 90% of the time you're going to get "seek counseling or talk to your pastor".   It's like Dr. Ruth - everything is ok as long as you use a condom.  Pat answers.   Or as I call it, "bullshit".

So I actually laughed at not only the question, but the response to a letter a few days ago:

DEAR ABBY: I am a middle-aged woman who is Baptist by faith. I believe that when I die I will go to heaven. My problem is, if going to heaven means being reunited with my parents and other family members, then I don't want to go! The idea of spending eternity with them is more than I can stand, but I don't want to go to hell, either. Any thoughts? -- ETERNALLY CONFUSED IN MISSISSIPPI
DEAR ETERNALLY CONFUSED: Yes. When you reach the pearly gates, talk this over with St. Peter. Perhaps he would be willing to place you in a different wing than the one your parents and other family members are staying in. And in the meantime, discuss this with your minister.


I'm not sure which item is the more stupider of the two.  The first part of Abby's response could have been tongue-in-cheek, but since she has her pat follow-up, I'm guessing it is not.  I'm surprised she just didn't say, "fly on over to another cloud and only see them at holidays but hold your tongue if they upset you.".  But the lady who axed the question, is a unquestionably a fucking moron.

I get that people here on this hell-on-earth need to believe in heaven, but I'm not sold on it.  Yes, I am ye of little faith.  I need to see it, and one book isn't going to sell me on that.   Hell, there is film, audio recordings, pictures and, according to amazon, 5,183 books on Kennedy's assassination, yet there are still questions on who may have been involved, how many shots fired or if he died at all.  Yet one book - possibly the biggest selling novel of all time - determines that there is a heaven?   Puh-leese.

I might be 100% wrong on that existence.  But me getting past - or not- those pearly gates most likely does not depend on me.  g-d is not just....or if he is, it's all relative on what one might consider "just".   Turning people into pillars of salt or having someone sacrifice their son on an altar, or whales, arks and cutting babies in two don't seem like a "good guy" mentality.   This behaviour is ok by the folks who support Fox, but........   So technically, our version of being good might not matter in the slightest.

People talk acting like Jesus, as if it is the way.  But if you act like g-d himself, and not his offspring, would one have to be a serial killer, pyromaniac and in general, just a prick, to get a harp and wings?

The only heaven, if it exists, is one where I am with certain folks and of course, my cats.  But according to the Sunday school teacher on the Simpsons, I'm not hopeful.

"For the last time, the ventriloquist goes to heaven, the dummy does not!".

If I have my leg amputated, will it be waiting for me in heaven?

And will a prayer bring a dead squirrel back to life?

I always find it comforting to know that g-d condones genocide. I won't feel guilty during the zombie apocalypse that way.