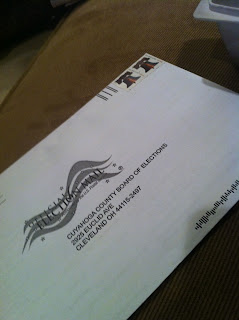 Not one to miss an election, but knowing my travel is unpredictable, I did the absentee ballot once again.

I don't think I have visited a polling station since the 2006 primary election. Ohio had gone to the Diebold system and I wasn't really confident my vote was being tallied, since the octogenarian volunteers couldn't figure out the machine...yes, singular, as only one of the three seemed to be working...and I never did get to see a printout of my actual vote, which is required.

Between that an my travel, it is just easier to request a mail-in ballot and hope that some Ohio board of elections doesn't leave them all sitting on a loading dock uncounted.

Yes - that has happened.

Either by booth or mail, I feel my vote has an equal chance of being ignored, so why stand in line at 06:30 when a postage stamp can do that for me.

Speaking of, I'm pretty sure the envelope used to be pre-paid, but the notice on florescent green paper told us to adhere postage, so I'm assuming there was a change in procedure.........and the economy.  The county/state can no longer afford this luxury, which means all those infirmed (read: elderly) voters who can't make it out and don't have the disposable income for whatever a stamp costs these days, their voices and votes will be unheard.  As if they really were before.

Ohio had only three things on the ballot this year, save the local judges race.  But all of them I wanted to vote on - including the vaguely worded repeal of "Obamacare".  With the other big issue being the repeal of the anti-collective bargaining issue that Ohio's congress sped through session.

With the latter being such a hot button issue and way more ads to repeal than to keep in place (at least up here in NE Ohio), Issue 3 on the healthcare repeal isn't even a whisper.  Not one commercial, not one yard sign........nothing.

My ballot was mailed weeks ago, as I knew I'd be out of town........and had no intention of hitting the voting booth if I weren't.

Song by:  Patty Larkin
Posted by Blobby at 7:03 AM

"Issue 3 on the healthcare repeal isn't even a whisper." Greg and I noticed that too. In fact, we didn't even know that was a ballot issue until we voted (we did early absentee, like you). I'm guessing that because Issue 2 is going to lose so big (2:1 margin they predict), Issue 3 will lose too.