Honestly, this might be the last post I do on gun violence / mass shootings in the U.S.

I mean, what's the point?

Seriously - look at the headline above. We are 24 days into the year.  I mean, I know I'm not influencer in law or on-line, and clearly no one is doing one fucking thing about ANY of this.

I'm just wasting time and keystrokes here. You're wasting time reading this nonsense. And in 2023, we're doing both while people bleed out from multiple gunshot wounds. And Congress is more worried about pride and trans flags flying over embassies. They're pro-life, but only if you're a 6 week old fetus wanna be. Other than that, fuck you.

Fuck Them.  Both parties.

Not for nothing, but the Doomsday Clock was just moved to 90 seconds to midnight. 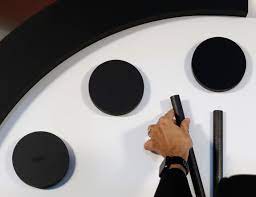 Mind you, this has more to do with making the Earth uninhabitable, or you know, nuclear annihilation, but let's face it - the chance of any of us dying at the hands of gunman (yes 'man' !!) are more realistic than Putin or Jun Un ending life for everyone because they have their thongs in a bunch.

Doom is Doom - one way or the other. It's hard inhabit the Earth with a bullet through your skull.

So yes, maybe I will post again on gun violence, but it's gonna have to be a doozy. They keep upping the game - and the numbers - so, it's really gonna have to get my attention.

Song by: the Sonics

I think it makes sense to keep blogging about the issue. If we all act like it's no big deal then nothing gets done and the Repubs get to spend all their time defunding public libraries or whatever.

While you are very understandably consumed with frustration and exasperation I think it's safe to say that (most of) the rest of the world cannot comprehend at all just why there aren't enough American politicians willing to DO something, ANYthing, about it. (Though of course we know the real answer to that full well!) My heart always goes out to those brave souls in the U.S.A. who are continuing to fight on the subject - even if one doesn't have to be 'brave', simply sensible. The struggle WILL be won some day. If the start of it doesn't happen in my own lifetime, my time ahead being probably more limited than most, I so very much hope a great number of you will live to see it transpire.