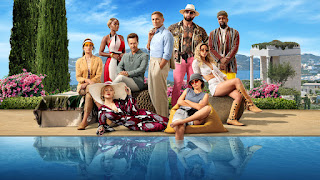 In our effort to be better in our movie "going" experience, we Netflixed Glass Onion over the weekend.

We had seen Knives Out at the theater years ago, and enjoyed it, save for Daniel Craig's Foghorn Leghorn impression - which was just 100% distracting from anything he did.

I was assured by friends that his horrible southern accent was toned down in this one - and it was. But not enough, in my book.

I don't necessarily mean for there to be spoilers below, but perhaps. Read with caution.

The cast, for the most part, is good. There are two minor characters - especially one - that could be dispensed of and no one would even know. Possibly both, though one serves a slight slight slight purpose.

Like the first movie, they writer / director doesn't do too much (enough?) with the "ancillary" characters. All have semi-interesting, yet never truly explored, backstories. In the first movie, it was a sin to waste Toni Collette the way they did.  Ditto with Katherine Hahn in this one.

Edward Norton and especially Kate Hudson seemingly have one acting style - no matter what movie they are in. I don't quite get Norton's appeal, though I somewhat remember liking him in Birdman a few years back. Hudson isn't bad, but you know, she's not Streep.  Or even Hawn.

Janelle Monáe was the stand-out here in the entire group.

Without too many details, all the characters (kind of) get invited to a private island for a murder mystery party by Norton's character, who I'm assuming is Musk-like. Heavily involved in space, energy and a Twitter-like social medial platform. Technically, one person wasn't invited at all. More puzzling is why another was. It's a big plot hole for me that wasn't discussed - though I have my reasons as to why they might have been.

My problem with the cast of four of the characters was their lack of any morals whatsoever. Once or twice the filmmaker tried to inject some kind of conscience into them, but either not enough, or the actors couldn't pull it off.

Any attempt at redemption at the end was only to save their own skin, which was their problem and flaw in the first place. And there was no real sense of finality.

Like the first one, Onion was fine and somewhat clever. But like I said with the first one - and I stick with it - it was no Murder by Death.

I enjoyed Knives Out more than the follow up, Glass Onion. What I forgot about the original, until I watched Glass Onion, was how horrible and self-centered all the characters are in both films.

However, I think it makes for a good Friday / Saturday night film to curl up on the couch and watch - which is what I do most weekends in the winter here in Boston.

Do you know if this is going to be an ongoing series or was this sequel a result of the commercial success of the first film?

I had heard, but never verified, is that Craig's character was supposed to have a different accent for each film - so I'm guessing with its success, there will be more.

Janelle Monay stole the show. her acting, the back stories!

But yeah, Cleveland's own Kathryn Hahn was lost with a partial role. And Kate Hudson has one role she can do - breezy blond.

Still, I liked it better than Knives Out.

BTW, the property where they shot Glass Onion is for sale.