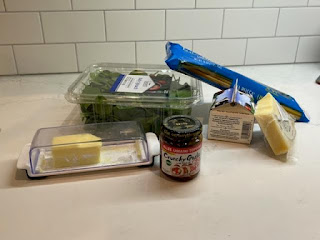 Sometimes, food wise, 710 and I are on the same page. Mostly we are.
Near the end of '22, the NYT Food section had an article on their top 50 recipes for the year. At some point, separately and not knowing the other was doing the same thing, we went through looking at the offerings.
Some of them, I had already made. But only one other stood out for me, and I said - to myself - that I would make it. It was a pasta dish that contained 'chile
crisps'.
Apparently you can buy this product, though the Times told me how I could make my own, which was my intention.
However, for the holidays, 710 got me a jar of chili crisps. Mind you, this was without ever discussing the article or any recipe. As it turns out - and as you already know - he saw it too and thought we could try it. I suppose you could say he got it for me so I could make the dinner. I didn't quite see it that way, but I was gonna do it anyway.
So, with that, I present: Chile Crisp Fettuccine Alfredo with Spinach.
Apparently there are different levels of heat in chili crisps you can buy. I had 'mild' and it was. But more o that as we go. You can see from the above, the ingredients are minimal. I think it takes as much time as shredding the cheese as it does boiling the water.
Ingredients
4 tablespoons butter
1 to 2 tablespoons chile crisp, plus more to taste
1 cup heavy cream
1 pound dried fettuccine
1 (5-ounce) package baby spinach
¾ cup finely grated Parmesan (2¼ ounces), plus more for serving
Preparation
Bring a large pot of salted water to a boil.  And now, I did not get a picture of that. Use your imagination. 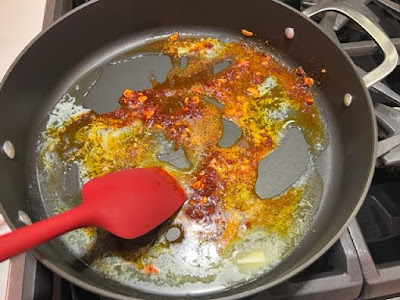 While the water heats, melt the butter with the chile crisp in a very large skillet or Dutch oven over low heat.
I used 1.5 T of the crisps. Since we had 'mild', next time I would do the full 2 T.....or more. 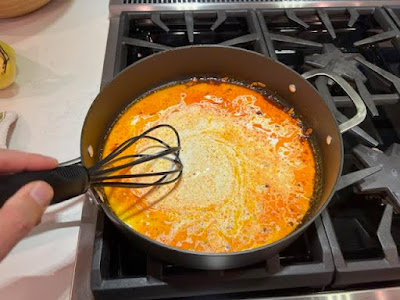 Whisk in the cream and keep warm over low. (It should steam, not bubble.) 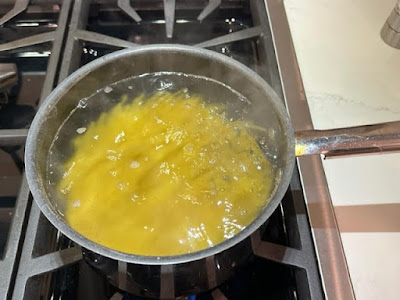 Cook the fettuccine until al dente according to the package directions 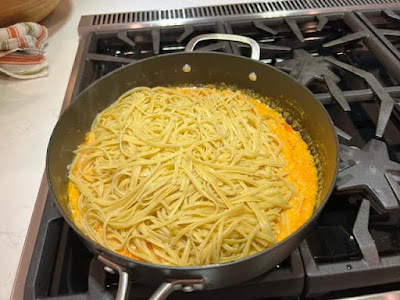 Use tongs to transfer the noodles to the cream mixture, reserving the pasta water. 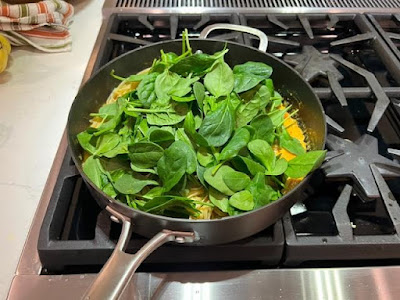 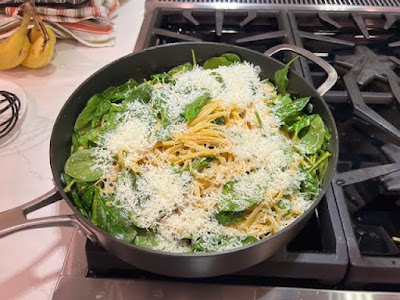 Add the Parmesan and toss, still over low heat..... 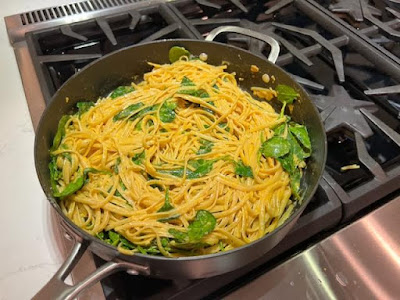 .....until the noodles are slicked with a creamy sauce, adding a spoonful or two of pasta water if needed to loosen the sauce. 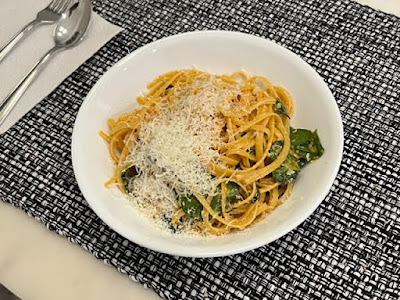 Divide among serving dishes and top with Parmesan and more chile crisp, if you’d like. Serve immediately.
As we didn't know the heat quotient from the crisps, I did add more of them on top of the dished up portion. In retrospect, I wish I had.
The flavours of the pasta were fine. We both really enjoyed it, but the cream really muted what I'm guessing would have been a bolder taste.
This went from nothing to the table in less than 25 minutes. I think I was smart to shred the cheese even before I boiled the water, as I did it by hand and not food processor. Nothing was rushed and everything came together just fine.
The recipe says it serves 6.  Mehhhhh.  Maybe 4.  Six would be a stretch, even with a salad.
Will totally do this one again.
Posted by Blobby at 12:07 AM

Oh! Pasta! How cruel to be posting delicious pasta recipes in January, month of the Most Austere Diet.

I had no idea what chili crisps were. Apparently I am ignorant of the trendiest new condiment since hot cock sauce.

Looks interesting, and included greens so it has to be healthy.

Made this last night. You are correct. It’s good.