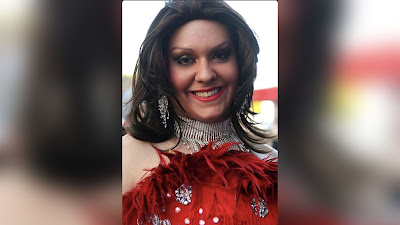 This would be funny if it weren't already a joke. And a dangerous one.

The intertubes have meme after meme of fake lie after fake lie (which I know....lies are fake).

We know his lies. Most of them. Some of them.

Maybe George - or Georgia? - Santos was a drag queen, maybe not.  He's denying it of course. Oddly, it is the only thing he has denied. Usually it's list of "accomplishments" he touts - even doubling down on some of them.

But at this point, you can't expect him to tell the truth on anything, and even if he is, at this point who is actually going to believe that?

The memes. The jokes.

We are all laughing this off. To the point it makes zero impact. He's still in the House. He still has more of a say in making laws - or obstructing them - than you or I will ever have.

We joke about him so much, it is just that: a joke. Once again, we are desensitized to it all. Shocked and outraged for about 14 minutes and we let it go. And George is still there.

It's exhausting. All of it. All of them. It's just fucking sad.

Song by: No Doubt

If you wanted to have as much influence as Santos, you too could run for Congress. I am sure you would win even if your old drag videos turned up.

I agree that although the jokes are funny (for example) this is all a distraction. We laugh about Santos as North Dakota threatens public libraries, and president-to-be Ron DeSantis does whatever nutzoid thing Ron DeSantis is up to this week.