the Walls Came Down 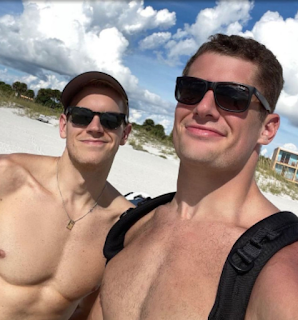 Let's take a break from Washington for a sec, shall we?  That shit show will be there when we return.
Howz about that Carl Nassib?
The first truly openly gay NFL foolball player (sorry, Michael Sam - you didn't get the job, so technically.....) now has a bf.
Yeah, yeah, he had to go outside the country to nab him, but I don't really know where gay football players have to get to get laid.
Apparently Denmark.
And apparently, it has to be another athlete, because us normies would never do. So Carl went for an Olympic swimmer from Denmark - as if you couldn't tell by the chest and abs with not one strand of hair remaining.
In a way it seems mundane. But it really is not. Whether you like football or not, a gay player, who is going into playoffs, is knocking cleats with another dude. Officially  Not just on the DL under the bleachers.    .......though the bleachers thing is possible, I suppose.
This isn't a sport that has embraced men going down on their knees.  Sure sure........to hold a ball in place for a kicker. And sure sure.............for the occasional fellatio.  Just as long as they are not black and doing it to support lives of black people.
It shouldn't be unimaginable for a pro-sports figure to be a 'mo and to have a normal life with a person of the same sex..........but in the NFL (or NHL, ABA or MLB) it seems taboo to a degree......though it shouldn't.
We've seen Brian's Song - if that wasn't two dudes in a love story, I don't know what was.  Yeah, Brian Piccolo had to die instead of move in with Gayle Sayers, but that had to do more with interracial relationships more than gay-acting.
But seriously...............
What is seemingly a small step forward, is a giant leap.
Maybe some kid playing ball in high school will see this and go, "hey..........yeah.........that's just like me".
The wall comes down a piece at a time. Good for Nassib (and his chest) to help make it happen.
Song by: the Call
Posted by Blobby at 12:07 AM

One role model at a time.

Dating someone outside your country and culture can be very exotic and alluring. The fact that they are both athletes may be what initially connected them, but who can say why or how they clicked. I hope the two of them make each other happy.

He has a job and he’s getting some, Movin on up, Go Carl, you are very cute by the way.