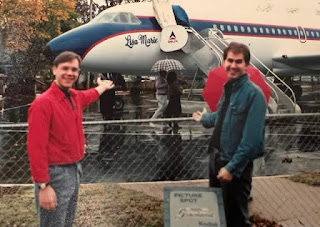 I really have nothing to say about Lisa Marie Presley. I'm not sure there is anything to say.

I can't say "I saw this coming" like you might have with Whitney Houston's kid. But I can't say I'm surprised.

You might have noticed that Mike and I skipped the Golden Globe contest this year (maybe last too?) so I had not vested interest in watching it to see how bad I might lose.

Due to that, I didn't see Lisa Marie get interviewed, but it sounds like she didn't look good.

What few things I've read, not one has mentioned her years in Scientology. Or her leaving it behind.

I had read she married Michael Jackson to get him to join - as they are always looking for high profile / $$$ folks. And when that didn't / couldn't happen, they divorced. Clearly no idea if that's true. Or care.

The above if my friend Jon and myself at Graceland-adjacent. This is the closest we got to Lisa Marie. We went on an excursion to Memphis - on a whim - and probably didn't have the $6 to tour the jet. We used it all on our first La Quinta experience.   .....and drinks at bars. And one Chinese restaurant that, and I quote, "looks a little pricey".

I can count on one finger how many songs of Lisa Marie's I've heard. She only had three albums and I had to laugh and laugh and laugh at American Songwriter magazine's social media stupidity: 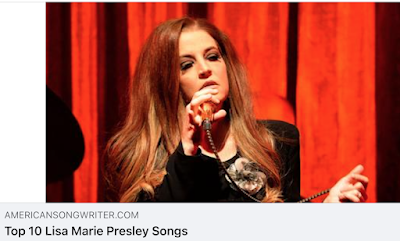 710 thought she couldn't make it as a singer being compared to her father. Actually, I think it would have worked in her favour. There could never ever ever truly be a comparison or the ability to live up to Elvis! If anything it would have been a free ride.

People are questioning, 'who has cardiac arrest at 54?'.

Ummm.....Women.  Primarily women. Women who are treated dismissively by their physicians when it comes to chest pain and heart attack symptoms. It's why heart disease kills so many women.  ....and at a younger age.

Fortunately, all three of her disks are charted on iTunes now. Unfortunately, all of Jeff Beck's reside in much higher ranking. The girl cannot catch a break.

I remember where I was, and what I was doing when I heard that Elvis was dead.

I loved that red canvas jacket. And I'm wearing my Grandfather's watch which, sadly, was stolen when my SF apartment was burgled in 1995. That was such a fun trip. Weather was shitty, though.

I was dealing with a seven-month-old baby when Elvis died. I only remember because said baby was born that Jan. 8th Elvis' birthday, accidently discovered by listening to the news. The more you know.
I never knew Lisa Marie sang. I didn't know what she did, to tell the truth.

First time stopping by. I would guess well over 98% of population knows about Lisa Marie Presley. Came of from Adventure of penguin Travel. If you have time stop over for a cup of coffee.

Show me toxicology, her photo at the golden globes , appeared as if she had already left the earth for outer space. I’ve been wrong before, and who can blow a hundred million dollars. I have no sympathy for anyone but her kids.