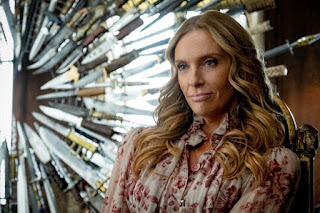 We actually saw Knives Out last Friday. Yeah - I'm just getting around to it now, but that's mostly due to pre-programmed posts.

Of course we were going to see it, I mean, look to your left.

Toni Collette was one of the two reasons I wanted to see it. Jamie Lee Curtis was the second. I mean, JLC just isn't in much that isn't a re-re-reboot of Halloween. Collette, is well, Collette. Never used enough on film.

The previews have been running for months, and they were well edited, so it looked like it would be great.

The cast, save one, is great. Daniel Craig is totally miscast. ....and remember, this cast that has Don Johnson in it, and even he's better than Craig.

Let me rephrase: I don't know what compelled the writer / director (Rian Johnson - who did the last, and one of the better, Star Wars movie) the idea to give Craig's character a southern accent. Having him from the south is not crucial to the character or storyline, so why do it?

If you've ever seen the Office (US version), where Michael Scott and team play a murder mystery game and Michael plays a sheriff from Savannah?  Craig's accent is that put on - and totally distracting. Horribly so.

In ways, Knives Out is clever, but not enough so.

There are one or two "plot" holes that I questioned from the word 'go'. The main one being: how / why would local authorities allow a private detective (Craig) to be part of, let alone lead, a murder investigation?

None of the cast are used enough. Craig and Ana de Armas (who is in almost every single scene) are the stars. The casting is well done (I love Michael Shannon, and Chris Evans is good and easy on the eyes), but I think they could have been utilized more......and better. So much potential.

The movie starts strong with the cast, and then they are kind of sidelined. More inclusion of their stories, assumptions and lies could have played into the mystery way more than it did.

The current administration play a not so underlying storyline in the movie as well.

BLOTUS is never mentioned, but alt-right is, as are cages, immigrations policies and red hats. de Armas is a nurse to Christopher Plummer's character, who according to the family is from Ecuador, Brazil or Honduras. They don't know - nor care. Not really. And then not at all, once they try to vilify her.  Deportation is suggested.

It was an engaging two hours (and it's not a 96% either, Rotten Tomatoes! - but Metacritic's 82% is closer to the mark), but make no mistake: it's no Murder by Death. Now that was a murder mystery movie that's hard to beat.

Just checked if I ever saw 'Murder by Death' as I don't recall a single thing about it - and I did, just the once way back on its release in '76. Surely calls for a re-watch in the light of your comment.

As for 'Knives' I'm with you on the curious casting of Daniel Craig though I did think he quickly added to the 'fun' of the film.
It was indeed a shame that Toni Collette and Jamie L.C. didn't get more to do, but that was inevitable with the kaleidoscope of players that the plot (quite clever, methought) demanded. A stronger focus on individual members may well have given things away.

Yes, that 'hole' in the plot that you mention did stretch credibility more than a little, but when you knew beforehand that Craig was going to be the central figure in the whole affair I for one quickly got over it.

All in all, it was more than just 'enjoyable' for this spectator. So far it's only one of five films I've seen this year to which I've accorded an '8' rating, so pretty well bound to feature in my 'Best of 2019' list coming up in three weeks or so.

I'm managing to hold off having a re-appraisal downwards though you're not exactly making it easy for me! :-)

Btw: Have you seen the Steve Shives review of this on YouTube? If not I think you're going to find his effusive positivity contentious.

I saw it too; I thought it was fun/OK.