When Will I Be Loved? 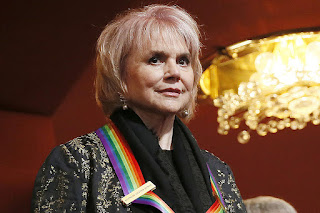 There are tons of reasons to love Linda Ronstadt.

Even if you weren't a fan of one of her genres, she did pretty well commercially, if not critically, at most of them.

To listen to - or read - her, it was only about the music. Not the fame, not the money, not the awards.

She has written, she gave away her Grammy awards. The Presidential Medal of Freedom she received by Barack Obama is under one of her beds somewhere. Not only did she not attend her induction into the Rock and Roll Hall of Fame - she didn't even watch it, live or after the fact.

In 2004, during the Bush administration, she pulled a Natalie Maines, while giving a concert in Vegas. She promoted Michael Moore's Fahrenheit 9/11 and allegedly half the audience walked out.  Mind you it was during the encore, so they were probably putting on their jackets anyways. But after her show, she was told to check out immediately and escorted out of the hotel - and then banned for life......oooooooooh.

If you read or listen to Mr. Ronstadt speak, she has always been very vocal about just about any social or political stance. Even when she had lots to lose, she gave zero fucks about what she said and where. In her movie and the interviews that accompany that - she is very vocal about our current immigration policy, including the caging of children.

This is a woman who has Mexican heritage and grew up on the border of Arizona and Mexico.

I stumped me - and yet didn't - when she agreed to attend the Kennedy Center for the Arts, where she is being recognized. She claims she wanted to meet Big Bird, as Sesame Street is also being honored.

I mean, BLOTUS hasn't attended one of these, nor does anyone think he would, as you know - arts. And while it's a wide brushstroke - artists can tend to be liberal.

STILL, you think that the Secretary Department might - just might! - vet who they invite to a dinner the night before the honors. But Ms. Ronstadt was invited and went. It doesn't take a Mensa member to figure out where this is going - yet, somehow Mike Pompeo had as much sight as Louis Braille.

Sunday morning, I woke up to see Linda Ronstadt trending on Twitter.  That's usually never a good thing.  But it was like xmas had come early for soooooo many people.  Except as it turns out, Mike Pompeo.

Now, I was skeptical at first, as you know......Twitter. And it took a while to confirm that it did indeed happen. The tweet made it sound real time, but it wasn't quite that.

Pompeo did lament when would he be loved, but it was in an introduction to her. She waited until she had center stage and a microphone.

There are various reports on the amount of applause she did or didn't get. One report said little, one said half the room, one said it was a slow build, but most people clapped and gave her a standing ovation. I'm going with the one in the middle.

Unlike Maines and the Dixie Chicks - Ronstadt has nothing to lose. She's not making records. She cannot tour. What are the MAGAs gonna fucking do - stop sending checks to the Michael J Fox Foundation?

The joke is: she wouldn't care if she did have something to lose. It's about some time someone said it publicly.  I wish she had been harsher, because honestly, she could have devastated him. But I'll take what I can get.

Had I not already owned so much of her catalog, I would be on iTunes right now, downloading everything she made.

Song by: Linda Ronstadt
Posted by Blobby at 12:07 AM

Burn! The moon's a harsh mistress.

I have been a fan of hers for DECADES, but, you're right, this makes me love her even more.
The woman has zero fucks left to give.

Or, as a friend of mine might say:
"Off is the direction in which Mike Pompeo can fuck."

"Hasten Down The Wind" is in my Top Ten Favorite Albums of all-time. Loved the documentary, "The Sound of My Voice" (I know you, Blobby, were more of just a "like" on that one). Her biography, "Simple Dreams: A Musical Memoir", though, was a bit of a snooze.

I love Linda. I've always loved her, going back to the Stone Ponies. Hasten down the wind...I just want to lay on the floor and listen to it again.

I remember when she came to PHX for a talk in Scottsdale. She had the audience (mostly GOP Scottsdale types) eating out of her hands until she made a remark criticizing Joe A and the audience bristled.