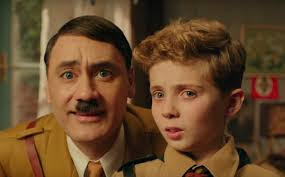 It appears the movie season isn't done. We got to see Jojo Rabbit Friday night.  ....and who knows, we might eke another one out before year's end.

Jojo, initially, was one of those movies I immediately wrote off not wanting to see.

A movie / comedy / dark comedy about Hitler,  Hitler youth and Nazis is walking a tightrope at best. Hence, my writing it off. There is little chance of a great outcome and you have to believe it was a hard sell for the studio who eventually made it or picked it up for distribution.

Jojo comes as close as probably anyone's going to get to that described sub-genre.

I didn't know until after (you know me and reviews) that the director / actor playing Hitler (Taika Waititi) was a Polynesian Jew or that I had already seen one of his films (Hunt for the Wilderpeople).

The short premise is:  Jojo, a Germany boy coming of age, but still young enough to have an imaginary friend, joins a Nazi youth camp to learn war games, ambush techniques, and blowing stuff up......and killing. Oh, and his imaginary friend is Adolph Hitler.

Things get complicated for Jojo when he discovers his mother (Scarlett Johansson) is hiding a Jewish girl in a crawl space.

While I've read the mixed reviews - and Rotten Tomatoes critics score (lower) and viewers (much higher) are indicative of written reviews) - they focus on actual story, but not the potential implicated underlying one:  Nazism.

Yes, I know a movie about Nazis shouldn't have an underlying theme of Nazis, but it does. 1930-40's versus now.

Children indoctrinated into this type of thinking that one (or more) types of people are bad and should be killed, when they truly know nothing about these that they hate.  Jojo struggles with keeping quiet about the girl in his house and letting people know he's "captured" a Jew. This all goes on with some people being the resistance to 'the cause' and being strung up for it - literally.

Throughout it all is Jojo's second best friend (Hitler is his best!), Yorki. The kid steals every scene which he is in. It shows when the two are together, there is no malice towards others and they talk about Jews and war like it's nothing, because to them it is nothing. Left to their own devices, they don't think that way. Yorki might sum up the situation with one line: "Definitely not a good time to be a Nazi".

Roman Griffin Davis, who plays Jojo, is pretty amazing. This kid, who I think is in every single scene, can truly carry the movie. Sam Rockwell does a really really good job as a demoted Nazi. Rebel Wilson, well, is Rebel Wilson. She was fun in say Bridesmaids or the first Pitch Perfect movie, but now you've seen her entire range: 1.0 to 1.001.

Johansson is still not an appeal for me. Reviews have been kind to her here, but I don't see it. Stephan Merchant is kind of Rebel Wilson-ish. He always has that cheeky approach and always a gleam in his eye, even while being in the Gestapo, yet he somehow makes it work for him.

Waititi was a "fun" Hitler, and often was the light-hearted moments of this movie - until he wasn't. Twice he went into führer mode. Twice, he took me out to the harsh reality of then and now.

I purposefully did not touch on the Elsa, the hidden girl, but she serves a great purpose in the film - especially for Jojo, but I'm avoiding any spoiler, should you want to see the film.

Jojo Rabbit was extremely well made, but I struggle to say it's a great movie. It's good. I "liked" it. Maybe I'm reading too much into the modern day implications.

I enjoy your movie reviews

I'm going to see it , on the strength of this review

I'm booked to see it next week. Didn't want to from the trailer but looks like it may not be too bad, or even better than that- and your take on it suggests that it's nowhere near a complete dud.