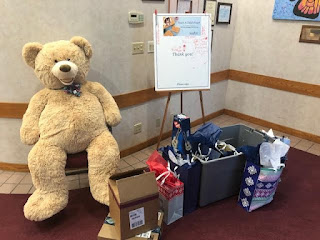 To quote Pee-Wee's Christmas Special: "Christmas is the time we should be thinking of others....".

Actually, that time is always, but as we know, that's not always the case. If we truly thought of others year-round, there'd be a lot less people hungry or unclothed year-round. Be it as it may, I assume that charity picks up more around the holidays.

I'm not judging anyone, as it can be the case with myself. I mean, you won't see me drop a dime in the Salvation Army kettle, but that has more to do with their politics regarding anti-LGBTQ things.

Yearly - not at the holidays - we give a donation to a few organizations, be it food banks, our LGBT Center, an animal shelter, and a local organization that deals with at risk children.  For the last few years, the latter organization has been sending me information on getting these kids presents for the holidays.

I've always wanted to, and had never gone through with it. It is not for lack of want for which I have failed. It's the overwhelming nature of the prospect.

At this smallish org, there were 473 boys submitting a wish list and 375 girl !! The question is never about getting them something, it becomes how do you choose which one?  I totally shut down when reading list after list. There is no good way to make a selection, I get overwhelmed and paralyzed.

This year, the link came and I started the shut-down process after an hour of perusing lists. In that hour, I barely scratched the surface of the just the boys lists.  So I sent a text message to the organization's executive director in the best way to select.

This was possibly counterproductive.

Jeffrey told me he picks the ones who needs hats, boots and gloves. That was heartbreaking to me.

And while I get it is a basic need, I hope that is some of what I'm providing for in my annual give. This is a time for celebration for them to get something they could never get any other ways. While gloves probably are practical, they don't scream 'joy'.  I did ask Jeff if all kids got something, or did certain ones go without. He assured me with their corporate sponsors, no kid would go without 'something'. I felt a tad bit better.

With my initial look at the list and the follow-up ones, I kept happening upon two boys. Both the same age, both with the same last initial (they only give first name and initial of last name), both asking for the exact same thing. Going by their first names, I am 99.7% sure they are six year old twins. Knowing I couldn't buy for one and not for the other, I selected them both.

As both wanted the same item, I did break with that. No reason to have two of the same gift, when they could share two separate gifts. I hope I didn't fuck that part up.

There was a suggested price point, one I went above. The known gift came in varieties, so I got the best version. So when I selected a second gift, I kept it around the same price point.  I dropped them off yesterday - which happened to be National Giving Tuesday. The date was purely a coincidence.

So yesterday truly was Giving Tuesday for us.  I dropped off the gifts and made a special contribution to the animal rescue place (which doubled any amount given that day). And we wrote a special check for the Center (the gay one) as well.

While the presents in the pic don't look like a lot, Jeff showed me the big room that is filling up with donations.

While there, I took a pic of me with one of my great-grandfather and sent it to the cousins. 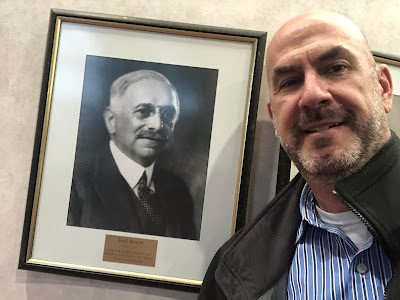 Of course, then, I had to explain to the woman at the desk why I was snapping the pic. She was fascinated that I was related - and then I had to explain the picture next to him was my uncle. She was hoping I knew the third guy, Mr. Saltzman, but alas, I know some from that name, but not that guy.

Anyhoo.....I'm not patting myself on the back publicly here about what we have done or do. I do think it's important to bring forth recognition to help out the less fortunate. One can't give to every organization or every cause they want - but it is important to give back or pay forward.

I'm happily not a member of the GOP who probably wouldn't dare give to the social organizations we do. Lord know this administration will take away what they can. If I could afford to fund every needy child's lunch program, I would in a heartbeat.  But I do what I can - and hopefully you do what you can.

Whatever little you give, is still more than they have.

my fave giving spots are philabundance (food bank) and wrti-fm (local public radio station). spouse donates to southern poverty law center and city team (another food bank). we give monthly to these orgs.

My monthly faves are Planned Parenthood, the local food bank, and the clinic. All of this is on the assumption that if you can provide Moms with medical care and food they might get half a chance to get a momentary stable footing to help their families. OK, at least I can dream, can't I?