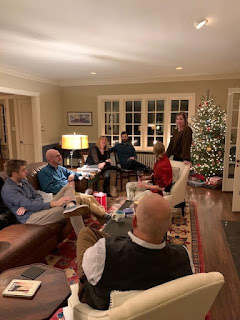 One of my sisters and I kept with the congregating of family on what would have been my mother's 91st birthday. In total, there were eight of us, including my niece's boyfriend and his mother.

Honest to g-d, I have no idea how we did this with hosting 16-18 people in the past. I suppose then, we just had heavy appetizers, drinks and desserts. This ended up a full sit down meal.......plus the appetizers, cheese, nuts, crackers........and dessert. And a full bar.

I should have temped the meat earlier than I did (that's what she said!) , so the meat was a little dry. Either I was hypercritical or everyone else was lying, saying it was great. I think it was both those things.

My homemade rolls were fair at best. I might get a post out those after first of the year. 710's roasted broccoli was wonderful, as were his mashed potat-ers. There was enough wine and beer for all. I still have a 6 pack, plus a few others left over.  The same cannot be said for meat, veggies and potatoes. All those were consumed.

Before anyone arrived, Shep had already "stolen" some crackers. But as it was a lot of food at dog level (or just above), for the meal hour(s), he was confined to his apartment. He was very very very happy to come down and see everyone afterwards. He was on pretty good, but not good / great behaviour. 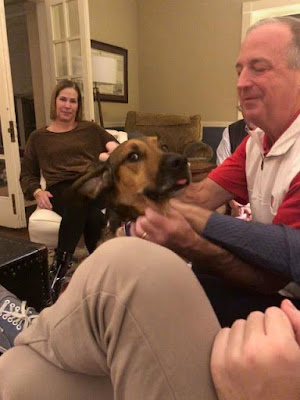 He did, however, get lots of rubs and pets from folks he knew and some he had just met. My niece gave him a new toy and some chews....my sister brought him some treats as well.  We sent home a new toy for Bailey..........who promptly ripped both ears off of it.

Yesterday, we hung at home and went for a hike. Our traditional Chinese dinner with my cousin is being pushed out a few days or so, due to some scheduling issues. It's all good. We opted NOT to go to a movie and just plop our butts to be with Sophie and Shep.

Hope all of you had a nice day / days.

Song by: Elvis Costello & the Attractions
Posted by Blobby at 12:07 AM

we had lasagna and wine; we stayed inside with the cats and watched movies. modest gifts were exchanged. naps were taken. a quiet day for all.