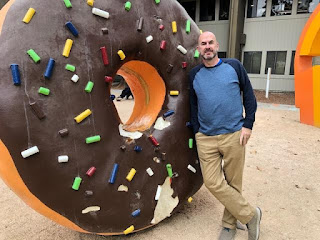 It's been like two weeks. I think it time I wrap up my vacation posts. This is the last one, I swear.

We opted for a non-scenic route back to the city. Hello I-101.  Actually, being the geeks we are, we headed first to Cupertino. Blobby and 710 wanted to see Apple's new-ish circular building.  So, we find it (ugly campus btw), and pull into the visitor center. On the roof of the center (which is really just a big ass Apple Store) has a deck that overlooks the new building.

But there's a guy in the lot who axes us if we are there for 'the event'. Clearly not. He tells us the building is closed. But we park anyways and see what is what - which was sort of, kind of, just walking into the building anyways........and maybe getting on the elevator......with a security guard (who never looked down to see we didn't have Apple employee ID badges).....and up on to the roof.

A slightly nicer campus with drab buildings. And a LOT of campers parked everywhere. Clearly, the Googlers (yes, that the employee name) live in them to avoid paying rent that they can't afford.

I may - or may not - have hopped on a Google bike and rode around. 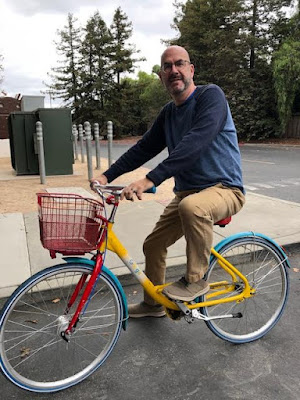 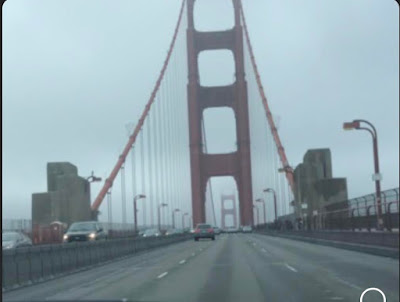 I went eons ago with my friend Jon. It's really a beautiful place - almost a religious experience. 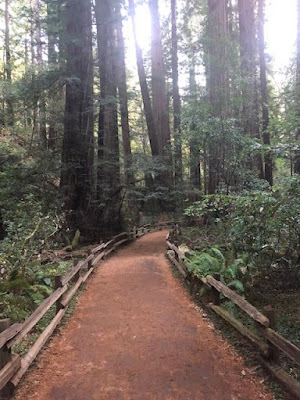 I don't care what Ben Wyatt said on Parks and Rec, this isn't Endor. That was up in the Redwoods, which is closer to the Oregon border.  I'd show more pictures, but as it turns out, there is no way to shoot the scale of this place. Things are far too high and sometimes narrow to get a grasp of how it is.

We hiked some harder trails and barely passed anyone. The ones lower down, had plenty, but not tons, of folks.  710 was just in awe. This totally made his trip. 710 loves loves loves cities and cityscapes, so, it only made sense to trek up there before heading to the airport for our red-eye home.

We really milked it all till the last minute.

I won't belabor the rest of the trip, which was just airport fuck-up-erry.


So we can drop the curtain on this trip.  You might see a few other pics in my Year in Pictures post, which will be coming up in a few weeks.

love the nighttime shot. and what does it say about us as a country that the employees are living in campers in the employer's parking lot?

Have khakis, will travel - and they become you. :-)

I suppose it wouldn't have hurt your diet to have ONE donut, especially when on vacation.