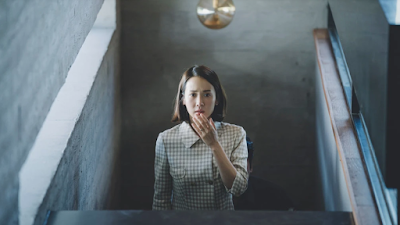 I hitched a ride to the funeral I mentioned the other day with two friends. We discussed movies on the three hour round trip. We touched on favourites from this year - and Parasite ranked at, or near, the top for them for the two.  David & James' rating got me thinking if we should indeed see it.

710 and I had seen a preview at some point, but it certainly did not draw me in. The title itself isn't really enticing, is it?

Parasite is a South Korean film, so not knowing the language, I had to read the subtitles. That's two foreign movies in a month if you're paying attention.  Rotten Tomatoes gives it a 99% rating, by critics, 93% by audience.

Speaking of 'audience'.  We had a doozie of one. I'll start with the three women right behind us. Talking the entire time. My turning around, glaring and inevitably saying, "REALLY?" did nothing to deter two of them. I'll give the third one prop for not participating, but she gets negative two for not telling her companions to shut the fuck up.

I'll get to the rest of the audience in a bit.

I won't spoil a thing - but the basic premise is:  a family of poverty level would-be grifters (Son, Daughter, Father, Mother) finagle their way into the life and home of a well to do Korean couple and their two children. Hilarity ensues?

Much of the audience was laughing at how the family - one by one - gets employed by this couple. It's pretty much at the destruction of other people's lives.......so, 'ha ha'?

You could say 'fuck the rich' if the wealthy family was a horrible group, but they are not. So the infiltration into their lives, and then their house didn't have me laughing out loud the way it did a lot of the audience. It was a sense of unease on my part.

The unease was to come.

The story is on of two parts, yet it is not.  There is another that comes after the successful commandeering of the family and their residence. One that I had no idea would be coming, or what it would entail.  You know - me and reviews, or lack of them. But even reading after the fact, nothing really lets you know what is to be.

That's as much of a spoiler as I'll give you.

The laughter that was in the audience, to a degree, remained, but it is now one coming from nerves.

So, the second story is odd, at best. I would bet a kerjillion dollars that no one in our audience recognized the cyclical partial ending to the script.

The ending, to me, wasn't satisfying. I wasn't as on the side of the poorer family from the get-go. So, while they had a certain comeuppance, it wasn't enough for me. But I'm a vengeful sort, so........

That all said, the film was extremely well made - both written and filmed. I never saw the director's Snowpiercer, as the parts people told me about really made me want to stay away. And at the time, I didn't know it was the same director.

Almost every review says 'brilliant' or 'best of the year'.  I might make the top third of my list, but I will go against David and James, as it's not going to make my favourite of 2019.

'Parasite' not due to open in this country until beginning of Feb, B, though I suspect that when it does it may not find its way to these parts. Nonetheless will look out for it.

Sounds like it'll be worth travelling a bit to catch it. Let's see.