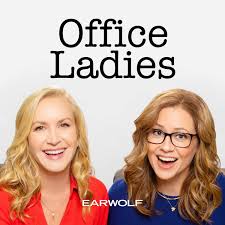 I semi-promise I'll get better about these. In four months, I think I've only done two.  Now three.

Office Ladies is kind of what it sounds like: Pam and Angela, from the U.S. version of the Office, chat about, and break down each and every single episode of the show.

This could be good or horribly bad.

This is a big time commitment. Bigger than the West Wing Weekly one I did a few months ago (which I'm not yet done with 7 seasons of that).  The Office had 9 seasons.  Ugh.

This is good and bad.

There are a 188 episodes. Jenna Fischer (Pam) and Angela Kinsey (Angela) are in every single episode. And apparently, they are best friends - something you'd never have guessed from the show itself.

The good news is: the first 7 seasons are pretty spectacular.  Funny and still painfully embarrassing to watch.

The bad news is: the last two. It's too mish-mashy and as I attest in some earlier post: James Spader is just creeeeeeeeepy.  And Ed Helms as he becomes boss (one of many in those last two years) and the show doesn't know how to make him awkward and funny like the did with Steve Carell.  He's just annoying and awkward - but funny ain't it.

Like the West Wing Weekly - they break down each episode week by week........so you'll have them for 188 weeks.  The idea is to give some insight into the show, the background of what happened with writers, directors and cast - good and bad.

The difference between the West Wing and Office podcasts is the former has an outsider - a person never affiliated with the show. They bring the perspective someone associated with the series might not have. The co-host was only on the show for the last four seasons, so could be a little more objective - or at least question some things.

With the Office Ladies, it's all too familiar with Fischer and Kinsey. Cast mates during all 9 seasons and best friends. Now I know how 710 feels when he's with my bestest friends: he knows all the players and kind of the stories, but we can talk in shorthand and leave folks out of the actual joke.

Should it not, then I won't listen to all entries of this podcast. I'll just have to wait for certain episodes:


There are probably others to which I'd like to listen - most anything with Todd Packer. For some of these, I might be waiting a long time!

Someone loves this show; he hasn't been keen to hear the podcast though.