a Good Idea at the Time

It's tough to believe you are actually thinking about taking advice from John Dean.

For those of you too young enough to know the man - you'll want to Gooooooogle his history. Still, the man makes a good point. 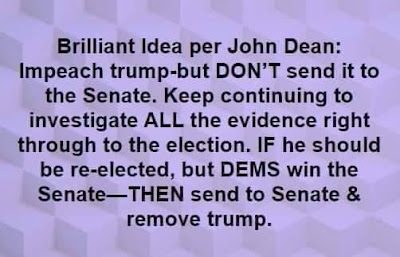 While it sounds far-fetched, it really isn't.

I do not believe this impeachment process is going to go "our" way. The repercussions and the reenergization of the BLOTUS base is going to come back and bite us in the ass.

Moscow Mitch has already said he's ready to acquit without even letting the Senate take a vote. That sounds democratic and adhering to Senate rules and not at all blurring the separating the branches of government.  {the sarcasm is implied}.

But then you have that nelly queen chiming in:

These motherfuckers aren't even trying to hide behind being pseduo impartiality. I suppose they could say the same thing about the House democrats, though I don't think things are equal that way. At least the House took weeks to examine evidence.

That said, the Democrats are not ballsy enough to do what Dean suggests. They could milk this, but completely on-going could backfire too should it drag on too long.  But they won't.

This one is slipping through our fingers.

Yes. And the nation does not care.
That is the end.