My Name is Emmitt Till 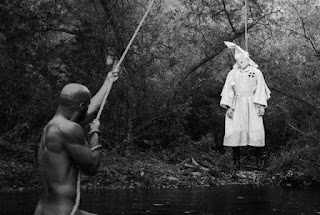 I know I wrote about this almost two years ago, when the ultimate douchenozzle (it's a word!) Rand Paul held up legislation on a national anti-lynching law.

It amazed me that day, and then two years later, that we didn't have one. Or that it took 200+ years to do anything about needing one.

Yes, half-hearted attempts were applied, but you know..........nothing.

Signing the Emmitt Till anti-lynching bill doesn't make Pappy Joe better in my eyes, but at least he signed it.  I mean, these days - who knows.

I didn't even know the legislation was back on the table. I assume anyone in the GOP who voted for it were afraid of the blog image:  it might happen to them!   ....and honestly, for some of them it should.

What. The. Actual. Fuck.

Segregation was well into the 60s, bussing by the 70s, majorly unfair sentencing law biases, and the continual police brutality against people of colour doesn't really scream for anyone at the DOJ or Congress to act on anything.

The idea that we've gone this long without legislation astounds me. I assume Congress thought that there are murder and hate laws in place that would cover such thing, but...........I don't think that people who string others up are really thinking, "ooooh, there are laws against this".

While it is deemed a national hate crime,  I cannot seem to find is how this law differs from murder laws and hate crime laws already on the books. I would like to think that punishment is more severe, but that might not be the case. Should it not be, then it is all just for show.

The law makes it a federal issue, if the racist locals overlook the crime, the feds can step in. And sadly that still happens - or jurries let racist little turds walk, Lynching is a horrible crime of terror, the victims were generally left dying in a public place, to send a message to others that a grisly fate awaited them

Resigning it to history at long last is a symbolic marking point and a beacon for liberty too - shining in the darkness where bad men spawn their terrible plots.

Finally.
I will focus on this and hope this moves forward with positive results.