Walking in my Shoes 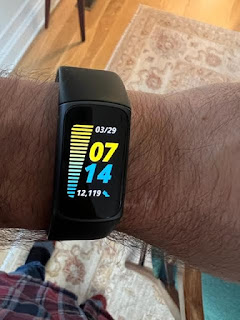 It's been like almost three years. It was bound to happen:  I needed a new FitBit.
I think this might be my fourth or fifth one.  Seriously.
The first one was from work. The less than basic model that the organization purchased in mass to hand out to employees to make them healthier.  It got me going, but not what I wanted to wear.
I don't know the models and too lazy to look them up. But let's say with one, I went swimming in Maine and remembered far far too late that it wasn't waterproof. And it was vacation, so I didn't have a box of rice in which to place the device.  ....so it died.
The next one was the same model, different colour. It is quite possible probable that I lost it while drunk and in a Thai restaurant.........bathroom.
I'm not blaming Rebecca on this. I'm just saying she was in Maine when the first one broke, and drunk with me - and a sober 710 - in the Thai eatery.  Coincidence?  Who can say for sure.
I should say, 710 got me all the purchased ones. Along with the replacement for the last. This is the one that lasted three years. Oddly enough, I was with Becky a few weeks ago when she axed me about it. It was a serviceable model, but useless to look at outdoors. The matte grey lighting left a lot to be desired. Perhaps she put a hex on me, or it. Perhaps not. Who can say?
But this last Friday and Saturday, it was dying a semi-slow painful death. For a long time, it couldn't keep a charge. Then when it could, it buzzed (vibrated, that is) in a weird manner, and not when it was supposed to. Then it just stopped counting steps.
710 to the rescue. He hopped on amazon and I got a new one the next day. He didn't ask about a preferred model, but he also knows I don't really care. And I don't.
The new one is colourful! It's easier to use and read. Well kind of.  That 0714 is the time. I wonder if I can switch that to military time. because 0714 implies A.M. and it's not. 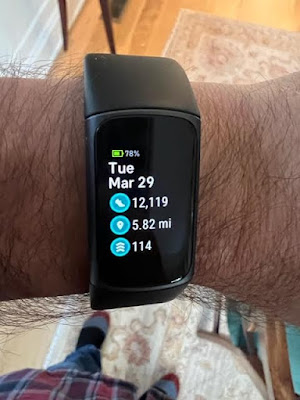 The display is nice and easier to maneuver through, and it's not an Apple Watch, one of their items for which I can think of having no possible use.  This is just fine.
Now that weather is slightly better (it's supposed to snow in the a.m. and be 60 later on!), I can make my 10k per day.  Honestly, with the snow, ice and cold since January, I've hit 70k per week only twice since the first of the year.  But soon I'll be able to consistently walk during my lunchtime.
I'll have to wait for Becky to see it until a newer better model comes out.
Song by: Depeche Mode
Posted by Blobby at 12:07 AM

And there was me naively imagining that if you invested in a "Fit Bit" you would have it for life. Not exactly environmentally friendly if you have to keep replacing them... Oh and "Hello" Bobby. I see you have been blogging here since 2003. That's pretty amazing.

And larger displays for older eyes

I too have had a few; it feels like they are made shoddy to oblige me to purchase a new one
When my next one breaks I vow to wearing an old wristwatch