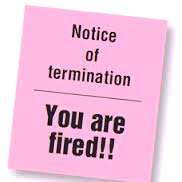 I'll start this off by saying: I'm not a monster.
....yet, I am.
I'm a boss. You know?  Somewhere under me, 229 folks fall under me. Well.......227, probably by the end of today. But you know, it will be back to 229 when I replace them. Should someone else not fall away before that happens.
I REALLY try not to fire two people in one day. In theory, I should try not to fire anyone, but that seems unrealistic. As Donny Osmond and his brother sang, "one bad apple, don't spoil the whole bunch of girls...", but make no mistake, there are bad apples, and they can get that whole bunch disgruntled.
That said, I am sad to have to fire one of these folks.Still, it was a bad infraction, even if done for the seemingly right reasons. It is an automatic termination.
However, the other...................I am going to have so much internal glee, I can barely stand it.  ....except, I'm guessing this gal would cut me given the chance. And it's quite possible she'll try to take that chance.
She is a time thief.  What she thought is, she wouldn't get caught.
Honestly, if the supervisor who is currently out on leave weren't, oddly, she might not have noticed. But I did. Somehow I found out she was clocking in without actually being on site. One day not even coming in, but swiped in and out.
She figured out how to VPN in and clock in via the intranet. She'd clock in on time and show up later. Sometimes much later.  Her co-workers didn't tell me, because they assumed she had spoken to me. Her undoing were two texts saying she'd be late due to a "tire hole" and the next day, "meeting at her kid's school".  She even said she'd be in at 09:30.  Unfortunately, those texts came 15 minutes or so after she already clocked in...........but wasn't at work.
Now, in my book, you're to be at your desk ready to work at your start time. Not driving up to a building, swiping in, parking, grabbing coffee and then walking to your desk.  Hell, this chick was still. at. home!
BALLSY.
Still a terminable offense.
But she refused to show remorse, which I kind of get. But challenged me on "where you got your information".
My answer:  YOU!
You sent texts - which she claims to know nothing of. Nor does she believe Kronos - our timekeeping system. Our the IT tracing off-site IP addresses.  Or the time, I watched the time appear, while I was at her work station, hung out for 50 minutes with no sign of her.   She refuses to believe any of it. Or at least admit to any of it.
At one point there were tears. {yawn}
What she didn't count on was me not caring. Tears do not sway me. Empathy in these situations is on a break. A very long break.
I'm not sure why there were tears, except for HR (via Zoom) asked, "is everything ok at home".  HOLY MOTHERFUCK.
I. Don't. Care.
I traced the infractions going back two months. This isn't a one off.  This is a systematic fleecing. I created a very very detailed spreadsheet of every date, every swipe - and her first transaction at work.  Even if she WAS on time, tell me why you didn't do your first entry until 3:11 after arrival?
I'm a dick.
For the record, her crying story had sooooo many holes in it - more than her alleged tire! - that as soon as she was out of the room, I pointed them all out to a very unaware HR rep.  The rep apologized to me saying, "sorry I was rough on her".    HUH?
I swiftly told her, you were not hard enough. This isn't good cop / bad cop.
I'll get HR's final determination today, though they claim they'll recommend termination.  I'm assuming they won't.  But I also have a bet with my boss that this chick never shows up again.
Fingers crossed.
Song by: Frou Frou
Posted by Blobby at 12:07 AM

In many ways, the hardest part of the job, except when someone really deserves it. I sat next to a guy on an airplane one time who was a hired gun to fire senior management. Interesting conversations.

There is nothing worse than a cheat and that is. clearly who/what this person is....

David - i saw that movie w George Clooney. People loved it, I loathed it. It was all too real.