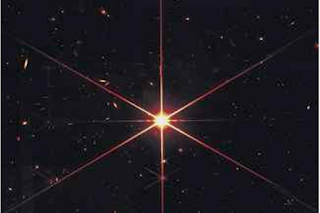 Technically, it's not fully operational yet, and won't be for a few more months.

Actually, they consider this star 'boring' and 'non-descript', so maybe it is Anne Hathaway.

HD84406 is 100 times fainter than what can be seen with the human eye, which is something, because I might have seen it and not known it.

The Webb is 100 times more sensitive than Hubble, and operating in the realm of infrared, James Webb is already capturing galaxies far more distant than any we have before. And still not fully functional.

I'm looking forward to June-ish, when this baby is fully up and running. I want to see what we can see - and how far back we can see it.

Will there be any sign of intelligent life, or another Florida?

I want a Hat Full of Stars Too.