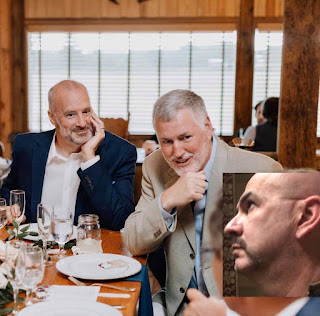 Oh my - it is THAT time. The 11th Annual Academy Award Guessing Game®

Quotes must be attributed, as I think he'd think I was suffocating him with my attention. He prefers that he keeps me at arm's length. I get it.  I'm a lot.

Like last year, I wasn't sure we'd do this. Covid still reigned during the last year film releases. Anything I saw, it was on the small screen - and while several, if not all, were out in some fashion on streaming, I did not take the initiative.  So the 'guessing' from the title totally applies.

Neither Mike nor I have discussed prizes.  Last year, I he got a bottom of Bombay Safire Gin. Hand delivered by me, I might add!  He might hope he does not win this year, as he might prefer me now showing up in person.

It's got 'dog' right in the title, so I'm sure it's cute.  Actually, I'm not big on westerns or the idea of tearing down homos - in the west or otherwise. I don't even know that they do, but the previews seemed to lean that way. But it's art. West Side Story is commerce. King Richard is just out and out Oscar baiting. It could easily be CODA too......but it's ok, but not Oscar ok.

Honestly, I think Smith has the odds, but I just can't pick him, even if it means losing to Mike. I have found him less than appealing in every.single.thing. he has ever done. Smith that is, not Mike.  Kind of.

Kotsur was the heart of CODA, one of the few movies I've seen.

Colman, Cruz Kidman have one already. But the Ricardos? Puh-Leese.  I'm still not convince Stewart can act, so Jessica wins!

Animated Feature Film ENCANTO FLEE LUCA THE MITCHELLS VS. THE MACHINES RAYA AND THE LAST DRAGON

Well, Dune is no Barbarella, (well, I assume - as I never saw it) so I'm going for a curve here. I saw the previews of what Emma Stone wore.

Campion will be champion.

Documentary (Feature) ASCENSION ATTICA FLEE SUMMER OF SOUL (...OR, WHEN THE REVOLUTION COULD NOT BE TELEVISED) WRITING WITH FIRE

It won't win best International, but it's nominated thrice (best animation too), so maybe it'll win something?

International Feature Film DRIVE MY CAR FLEE THE HAND OF GOD LUNANA: A YAK IN THE CLASSROOM THE WORST PERSON IN THE WORLD

I want to say Dune will take it, but you gotta figure it was a LOT of hair and make-up for Tammy.

Honestly, I don't care who wins as long as it ain't Beyonce (no accent).

the future!!!  someone's gotta design it.

I'm assuming Belfast just has lots of car bomb noises, Dog, lots of cattle noises, and West Side Story, a lot of finger clicking noises.....cool......go......crazy!  Dune probably has futuristic shit they have to get across.

Visual Effects DUNE FREE GUY NO TIME TO DIE SHANG-CHI AND THE LEGEND OF THE TEN RINGS SPIDER-MAN: NO WAY HOME

Everyone loved this movie. So, maybe? Even money that it's Dune, but.........finger's crossed.

I dunno - if it pisses Sam Elliot off, I'm ok with this. I liked CODA, but it's kinda been done before, but without all of the ASL.

I think the analogies were there. I'm ok with this.

As always, let the best man win. Let me it be me. I'm a running of out prize ideas of Mike.

Official tallies to be presented here on Tuesday.

Well, here we are again. I believe this is the 40th annual installment of Blobby and Mike’s Oscar Showdown (or it just feels that way), the show where Blobby does all the work, Mike breezes in at the last minute to fill in his (winning) ballot, and then gets to gloat over his triumph.

This year, it’s a different kind of contest for a couple of reasons. First, thanks to Covid, I’ve only visited the cinema twice over the past two years, and both times it was for the same movie: West Side Story. (Gotta sing, gotta dance). We did catch “Don’t Look Up” and “The Power of the Dog” on Netflix, but these other movies being nominated? No clue – have never heard of many. We’ve spent the majority of our screen time at home watching series available on Prime, including “The Americans”, “keeping Up Appearances”, “Duchess of Duke Street”, and “Line of Duty”. All the cool kids are watching these shows, I presume.

The other difference in this year’s contest will happen on Oscar night itself. Having given up cable TV this past year, I will need to find a service that is streaming the ceremony. Honestly, at this point, it would be easier for Blobby to arrange a round-trip flight (first class natch) for me to attend the Oscar party at his house – perhaps he’d make his signature sausage and roast peppers surprise? But given the lack of initiative in Blobby planning my trip, I guess I will struggle through and find a live stream somewhere. If we intend to banter via text during the ceremony, it would certainly be easier if we were at least in the same time zone Grrr

But on to more important topics – like my winning ballot. With just two sips of super caffeinated coffee in my system, here goes nothing:

Best Picture
CODA
Honestly have no idea what this movie is about, who’s in it, or why it’s on this list to begin with. I’m sure Blobby has attended art-house screenings of said CODA and will go on about the stunning costume design and the sheer brilliance of the cinematography, and then end up picking DUNE as best picture. That’s how he rolls.

Actor in a Leading Role
Will Smith
Always the bridesmaid, never the bride. Until now. Congrats Will.

Actor in a Supporting Role
Troy Kotsur
JK Simmons “was” Fred Mertz – but an Oscar? Nah – I’m going with the guy I’ve never heard of who’s in the movie I know nothing about.

Actress in a Leading Role
Penélope Cruz
We did see the Lucy movie starring Nicole Kidman and it was “good” – and I’ve heard Kristen Stewart’s hair and makeup people totally transformed her into Lady Diana herself, but since I find her really annoying, I can’t throw my vote to her. I’m going with Penelope Cuz to eek out a win here.

Actress in a Supporting Role
Ariana DeBose
Yes Anita – you go girl! She can act, sing, dance, and she’s a member of the church.

Animated Feature Film
ENCANTO
I keep hearing things about FLEE. Hope I’m not screwing this up…

Cinematography
WEST SIDE STORY
Going out on a limb here All bets say DUNE will take this one But did you SEE the dance at the gym and the production of “America” in West Side Story?? Geeeesh!

Directing
THE POWER OF THE DOG
Ms. Jane Campion to the stage, stat.

Documentary (Feature)
SUMMER OF SOUL (...OR, WHEN THE REVOLUTION COULD NOT BE TELEVISED)
Sounds groovy. Sure, let’s go with the Summer of Soul.

International Feature Film
DRIVE MY CAR
For no particular reason other than I want to win.

Makeup and Hairstyling
THE EYES OF TAMMY FAYE
Well if there is gonna be a movie that wins for makeup, why not Tammy Faye? And please – anything to keep Lady Gaga off the stage.

Music (Original Score)
DUNE
Dune. Here is your bone. Now go away and be quiet.

Music (Original Song)
"No Time To Die" from NO TIME TO DIE
It’s yours to lose, Billie. Go get your statue.

Short Film (Animated)
ROBIN ROBIN
So good you have to say it twice. Althought “Windshield Wiper” does sound riveting.


Aka “Getting Blobby Out of the House After Dinner”

Sound
DUNE
Strangely enough, DUNE keeps popping up in my projected winners. Hmmmm…Maybe I’ll have to see it Hahaha I make myself laugh.

Visual Effects
DUNE
The DUNE folks will be having a good evening.

Writing (Original Screenplay)
LICORICE PIZZA
Sounds delicious. And as easy as it would be to make a hilarious joke about Blobby and “The Worst Person in the World”, I’d rather be right than funny.

I had completely forgotten is was that time of year.
I confess I haven't a clue as to what movies are out these days.
I suppose the Oscars folk don't like that.