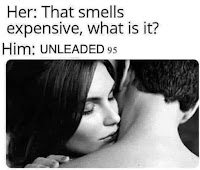 At least at this point, I can't really complain about the price of petrol. It's tough to moan considering all that is wrong with the world.
In relative terms $4.20 for a gallon of gas isn't all that much is it?
Consider the process of drilling, refining, shipping, infrastructure, overhead and all. It kind of seems a bargain - especially when you factor in the dinosaur into fuel processing time.
I mean, a 20 ounce iced tea at Starbucks is $3.75. Extrapolate that into a gallon and it would cost you $24.
I don't have a gas eating car, though it's not extremely economical either. And while I'd like electric, those are not as great for the environment as one might seem. Unless you're getting your electric from wind or solar, that power is still coming coal burning power plants.
I don't give a crap about the energy hog 4x4s complaining about gas prices - only that they blame Pappy Joe. Dems are happy to point out that presidents do not set gas prices. They're also the ones who will bitch when they are high and a Repub president is in office.  We are horrible that way.
Current prices hurt the folks who don't have additional expendable income for increases in fuel. I don't mean to be smug about the Starbucks angle. For so many, it's still paycheck to paycheck, and we have to be better about that as a country.  It's still decades away in the political environment in which we are now trapped.
The problem is Russia though. Well kind of.
Allegedly the U.S. only uses 4% of all gas from Russia, so the current fuel prices are really based on futures of supply and demand. But 4% isn't THE supply - not really.  I have nothing to back this up, but it seems like price gouging on energy companies.
Here is my hope though: fuck Russia. fuck the energy companies - at least the gas ones.
Maybe this will piss off enough people to think of alternative energy sources, which will also help save the planet - even though that's not the reason they'd be doing it. They'd buy electric and conserve for their own selfish needs - which is horrible - but hey, if it helps the bigger picture in climate change.......I'll take it.
I filled up for the first time the other day since the rise in prices. It wasn't pleasant, but it wasn't horrible either, but Shep needs to be chauffeured here and there, and not doing it isn't really an option. He'd make our life hell..........and we are here to make his life better.
Song by: the Pretenders
Posted by Blobby at 12:05 AM

I have two cars not driven a lot full of gasoline luckily the tanks were part full before I topped them off about ten gallons each. I bought premium for mine at 3.99 weeks ago,and Regular at 4.20 for my mothers. Yes people spin everything to blame Joe. It’s as clear as day to me. When the Oil companies report earnings again it will be record profits , just like this year. How stupid are we . Pretty fucking Stupid. I don’t have to drive much so I’m not a victim , I pity those who are

Saw an aerial shot of a Starbucks ringed with cars waiting to use the drive thru to get their Macha Frapa Crap whatever's for 5-bucks and then bitch about the high cost of gas.

We don't drive much, in many ways we have purposefully designed a life to require less driving. The USA has a long term design problem, of building communities based on lots of driving. For 100 years zoning made it nearly impossible to build walkable communities. We will pay the price. I will the car with gas about once a month.

Paid $5.09 for 87 octane the other say at the reliably low price gas station the other day and caught myself when I went to enter it into the mileage log. With Work From Home orders, the last time I purchased gas was in early January. Conclusion: stop whining and suck it up.

One also wonders whether or not the whiners have learned the disciplines of planning and budgeting. There are consequences for decisions to live in exurbs without municipal services and it affects how you budget. This includes identifying which parts of your budget need contingencies to allow for market fluctuations. When I was commuting 500 miles/week (I lived in the city, but the office was two counties over), I budgeted gas at $5.00/gallon and two tanks a week. Fortunately I never exceeded that (and have since changed jobs so I don't have to do that any more.