I don't feel that 2021 was a stellar year for music. I mean, it was ok......at best. But anymore, I feel a bit stunted in my music hunting abilities. There are very few standouts that I have for his year. In good conscience, I can't even really recommend anything off the new Foo Fighters disk. 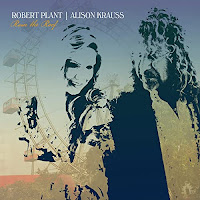 Actually, Robert Plant & Alison Krauss get top ranking.  There is no second.  Or third. Not this year. I wasn't feeling it.

Raise the Roof is far from perfect, but it has some perfect moments, and that is more than most releases I got this year.

Not just because Plant & Kraus have the top disk, they also have the top song for my year. "Quattro (World Drifts In)" would have been my top song even if their disk wasn't.  This is kind of more what I wanted of their entire album.  Muted harmonies and almost no rhyme or rhyme scheme. I'm loving it.

I didn't love the latest Crowded House disk. There are a few good songs on it, but fair songs for a normally great band are less than fair. But I thought "To the Island" was inventive and catchy.

And Garbage's last disk was morose for the most part. I get it. 2020-2021 was tough. BLOTUS. #metoo, Black Lives Matter.  Shirley Manson & Co take on a lot of these, some with more success than others. But I kind of liked "This City Will Kill You".
Aimee Mann's disk, late in the year, was a tough sell. And a tough listen. But she had highlights, like "Give me Fifteen". It's well structured and a good vocal.
Technically, the Watkins Family Hour is a 2020 release. Sue me! There are a number of good songs on the disk, but I kept coming back to "the Cure" - and this was written and recorded before Covid was a thing.
While technically I didn't pick anything from the Foo Fighter's last disk, they did release the Dee Gees (Dave Grohl), Hail Satin :  six covers of songs from Bee Gee's. They. Are. Excellent.  Some of them a bit too spot on.
Here they to "Shadow Dancing", which they did write and produce, but it was a hit for Andy Gibb, not the Brothers Gibb.  Drummer Taylor Hawkins takes over the vocals.
So - I have no idea what 2022 will bring. Who knows, maybe I won't even make it to a 2022 Year in Music post.  Gotta leave the door open...........just in case.
Posted by Blobby at 12:07 AM