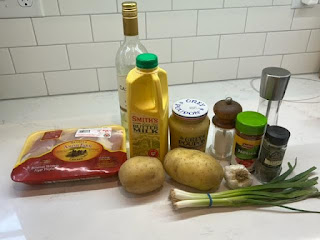 Let's be honest - today you're Cooking with Ina Via Blobby.
We "tape" Ina and watch whenever we remember her show is housed somewhere on YouTube TV.
The theme was weeknight meals - so, in my pea-brain head, I'm heard "quick".  I was watching the prep but not really listening to her timetables.
I should have.
On paper, and in cooking, Skillet-Roasted Chicken and Potatoes is easy. But timing is everything. Starting this dish at something like 18:30, and you're gonna start eating at 20:00.  You gotta start this the second you walk in the door from work, and even then, to eat at semi-reasonable time, everything else has to be prepped and ready to go before you step in your entry way.
Or it's a weekend meal. It's actually better if it is.  But let's get started and I'll walk you through it.
Ingredients
Prep 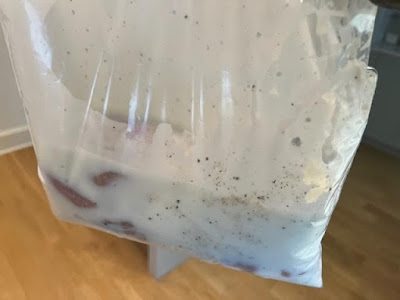 At least 4 hours (but not more than 12 hours) before you plan to serve, sprinkle the chicken all over with 1 teaspoon salt and ½ teaspoon pepper. Place in a 1-gallon sealable plastic bag and pour in the buttermilk. Seal the bag and massage it lightly to be sure the chicken is coated with the buttermilk. Place in the refrigerator to marinate.
Preheat the oven to 350 degrees.
Pour 2 tablespoons olive oil in an unheated 12-inch cast-iron skillet and tilt the pan so the oil covers the bottom. Lift the thighs out of the buttermilk, letting any excess buttermilk drip off, and place them in the skillet, skin side up, in one layer. Discard the marinade. 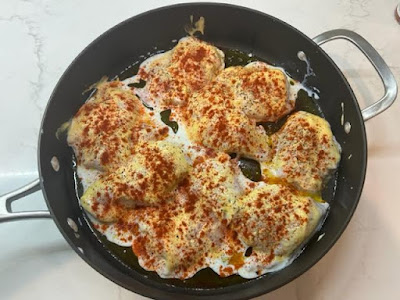 In a small bowl, combine the mustard and wine and brush it on the top of the chicken. Sprinkle with the thyme, paprika, 1 teaspoon salt, and ½ teaspoon pepper. Place the skillet in the oven and roast the chicken for 30 minutes.
Here was my first mistake. 30 minutes is the partial cooking time. We're not quite at the halfway point. 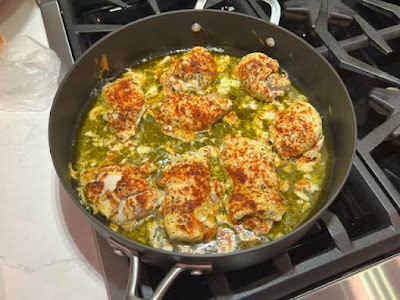 Yes, there's a lot of schmaltz, but you're gonna use that.
Using tongs, transfer the chicken to a plate and put the potatoes, garlic, 1 teaspoon salt, and ½ teaspoon pepper into the skillet. 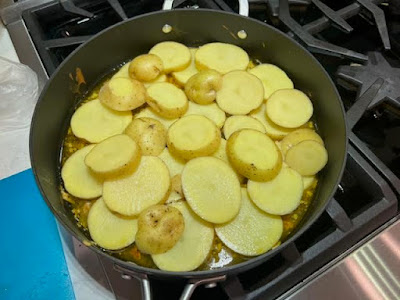 Toss to coat with the pan juices then spread the potatoes out. 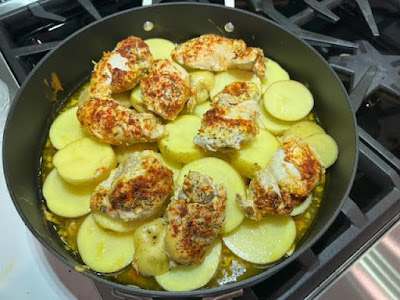 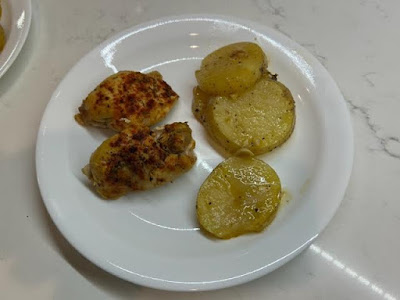 Return the chicken to the pan and sprinkle with the parsley, chives, and extra salt. Serve hot from the skillet.
A little colour would have helped. I had no chives, but cut up green onions..................and then promptly forgot to include them.
So a few things:  I didn't have skin-on chicken thighs. That will always enhance flavour and things would have browned better. But they're not as easy to find as Ina thinks.
Secondly, 75 minutes to cook is not a short amount of time for dinner. We've already had long days and while the prep isn't difficult, there is a lot of sitting around time waiting for dinner to be ready.
Thirdly, unlike Ina, we did not take the skillet to the table. That is a 425F disaster waiting to happen in our house. I get her idea, but it seemed less than practical.
Fourth - it was a good meal. I should have said that earlier.  1/4" slices of potatoes seems ok, but I thought the above plate would not fill me up.  I was wrong. Yes, there isn't a ton to the thighs, but the combo is satisfying.
Lastly - leftovers.  The garlic. The oil. The fat. It made leftovers taste so much better than the original meal.
Maybe how Ina should have sold this was to make this while eating another meal and just box up the chicken and potatoes as already prepared lunches or dinners.
I'll do this again for sure - just with different planning.
Posted by Blobby at 12:07 AM

A lot of moving parts for a quick meal, looks yummy

A+ for actually preparing a home cooked meal.