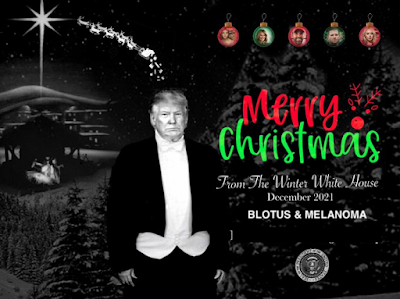 I am 91% sure this is my second fake in two consecutive days.
Now, how the card is signed off is a fake, because I made the changes. I wasn't about to see his name or former title in my blog feed.
Ever.
See, you would think it's a phony because Ivankunt is first and not Melanoma, but that's trickery. Melanoma is never coming first.
Ever.
You'd think it's phony because BLOTUS is made out to be a dick. He is one. But they mean a penis. Or a walking hard-on with ears. Trust me, he's walking erect due to the folks at Pfizer.  Still, I don't even put it past him with all the phallic references.  I'm sure the small-handed former "president" would say, "It's huuuuuuuuuuge".   I bet every woman he's been with would counter that.
But I know it's fake because Tiffany is actually on this card.
No one was expecting that probable mistake to be on the card.  No, not Tiffany - the other one. The boy mistake. No, not Eric. The other one.  No........the other other one.
Honestly, if it weren't for Tiffany, this could be a real thing.
Tiffany ruins everything.     .....just ask her dad.
Song by: Marti Jones
Posted by Blobby at 12:07 AM

I try not to ever think of these people. Never surprised never impressed, can’t wait and also hope to outlive their nasty uselessness.

If he were such a disaster waiting to out do himself in that department, I would find this terribly pitiful. I mean here is a guy who cannot accomplish one damn thing if he isn't belittling other people. So to make him feel relevant, he has to carry on the lie that made him feel big. Melania, on the other hand is of no use to anyone (but Putin).

I hope Baron gets out from underneath this family. He is the only one who has a chance of being deprogrammed.