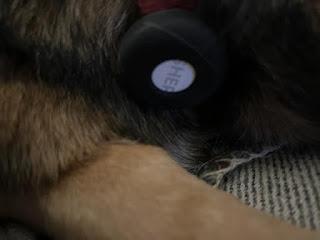 Shep still proves to be a flight risk.
It has not happened often, but it has happened.....four times since we've moved to this house - and two of those times in the last 10 days.
The first of those, he barely made it out of the gate. I called him and like a semi-good boy he came right back.
The second time was horrible. I had closed the driveway gates and we let him run about the yard. But he got out. It seems we have a side gate, which I kind of knew about but don't go over to.  An AT&T worker left it open - unknown to us. And he was gone.
It was dark. It was night. And he was not responding to our calls.  I was scared beyond belief with no real way to think we'd find him and hoping someone would and they'd scan for his chip.
As I went to go get the car to start driving around, I saw his ass wiggling on the other side of our neighbor's fence. He was smart enough to get back there, just not smart enough to get out - which isn't a bad thing.
And he was too stupid to bark when he heard us call him 651 times in 10 minutes.  I think it ended up being a stressful night for all of us. I swear I had PTSD for two days.
So, because of that, Shep got an early holiday present: Apple Air Tags.
Apple will say they're not for pets.  Screw 'em.   They also say not to put it on automobiles or other people to stalk them. But they have to say that. If I wanna track my dog, Steve Jobs' ghost Tim Cook can't tell me what to do.
One is on his collar right now!  .....as you can see. Honestly, I hope we never need to test them, but.......better safe than sorry.
I guess we'll see how accurate they are, but so far so good.    ....it's been four hours and it says he's on the couch,* 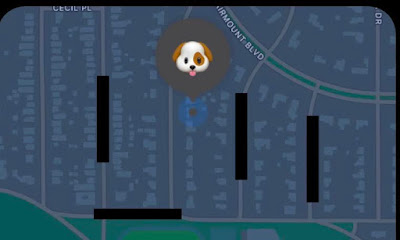 *it doesn't say that.
Song by: Frankie Goes to Hollywood
Posted by Blobby at 12:07 AM

All our gates have padlocks for this reason, only the yard person has a key and he has never failed us . Where we live in a cul de sac
Near a busy road could be life and death. Glad it ended well.

Apple will engrave them, a friend of mine gave them to her father as a gift, clipped on his keys, one in his car. They don't look or feel like a tracking device.

Had a similar horrible experience, however it ended well. I let the dogs (three beagles) out into the back yard early AM and went into the kitchen to make coffee etc. I heard the barking and went to the back door to let them in, but no dogs. I noticed that the gate was open (YIKES!), and was getting ready to search the neighborhood, however I still heard barking. I opened the front door and was greeted by three excited beagles. It seems that at least one of them remembered that they got fed when I let them back in, and wasn't going to miss a meal.

Sheep, hang with the big guys. It's warm and dry and you get fed regularly.

Good for you!
The notion of a lost pet is terrifying