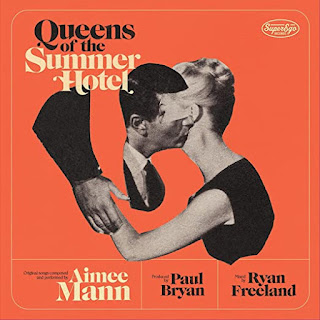 I get to squeeze one more review out before end of the year.  I think we're going out more on a whimper than a bang when it comes to Queens of the Summer Hotel, by Aimee Mann.

Quite honestly, I'm growing a bit tired of Mann's concept albums. It basically started with the Forgotten Arm (which was great) and continued on with each release. I don't need each song to be a chapter in a book I may or may not want to read:  like Queen of the Summer Hotel. Mann bases this disk on the book / movie / soon to be stage production of Girl, Interrupted.  Well, I suppose I should be happy she wasn't really into Twilight. Part comes from a stint she did at, in her words, "a nuthouse".

Don't get me wrong, the musicianship and vocals are still good, but the writing and arranging, well........it's not all it could be.

The songs are piano driven - as she has some physical reaction to guitars being too loud at this point.

When you launch a disk called "Suicide is Murder" and the song isn't irony, it pretty much sets the tone.

I think I heard "You Fall" in any number of songs on her last disk, Mental Illness.  It took all I could do to make it through "Robert Lowell & Sylvia Plath"......three times, just to make sure it wasn't good. And it's not. It's hard to pull of a waltz-like music backing on an adult oriented "rock" disk.

I am not big on "At the Frick Museum" either.

The only song I'm truly drawn to is, "Give Me Fifteen" and I can easily make it through "In Mexico". I guess I can make it through the entire disk. But after a number of listens, I realized I didn't want to.

I think the biggest crime of the entire disk is, it's boring.  ....and to a degree, it's all been done before.

I liked Mental Illness so much that I knew I be tough to follow it up. I do like some of the songs on Queens of the Summer Hotel, but it’s not nearly as good as Mental Illness.