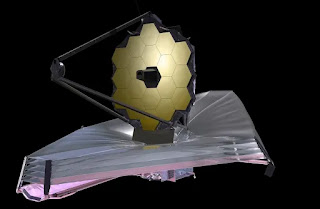 I'm totally somewhat psyched for the Webb telescope.
Sure it is a decade late a few billion dollars over budget - what isn't?
All the headlines say how better it is than the Hubble - and in a way it is, but it's not quite a comparison, as they are looking at very different things, and for very different things.  And where as we've had the Hubble for a bit, I think this thing has a 6 year life expectancy.
Still - what it is supposed to do it awesome.
While we won't start seeing images until mid-2022, the idea is for Webb to peer back in time, hopefully to the beginning of time, up to and including the Big Bang - which I think you can see on TBS at any given hour of the day. Oh, that Sheldon!
So far so good. The launch was flawless, which wasn't a given considering it went from South America. I mean, I don't think I've ever heard of a launch from South America! The sun shield is deploying as I type this. So many things still for it to do before it can think about working - each step vital to its mission.
I look forward to the completion of set up and then the data that starts coming back in June.
Song by: the Roots
Posted by Blobby at 12:07 AM

The French (and now Europe) have a space center in Guyana and have been launching rockets from there since the late 60s! Ain't the internet grand?

It will be interesting to see what we can see. There have been a lot of launches by the French in south America - but I am a rocket nerd.

I love a good telescope, usually in a high rise.