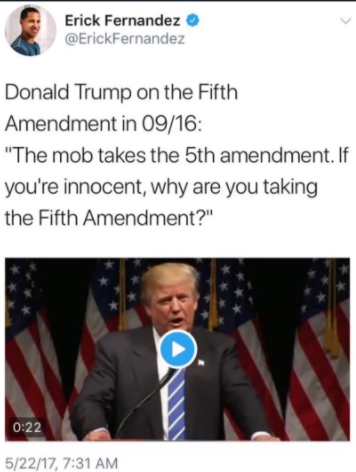 Two days ago, Eric BLOTUS pleaded the 5th as not to answer questions regarding BLOTUS family based on Michael Cohen writing that BLOTUS, when talking to banks, inflates his worth and holdings. Or as you might call it: bank fraud.

Oh, and this "witch hunt" is not Federal. It's NY state, so there are no pardons or anything to be had.

I'm now picturing Eric doing a Jerry Falwell Jr scene, but not with a pool boy and his wife in one of their many homes, but with black and muslim guys, and in a cell in Sing Sing.

Listen - you have your dreams, I have mine.

May all your dreams come true!

everything with this crime family is a "witch hunt" in their eyes. WELL, STOP COMMITTING CRIMES, ASSHOLES!

Even in a cell at sing-sing, could you bring yourself to touch Eric? He sight of him makes my skin crawl.

Make him bury his face in the pillow!

I'd be just as happy to see Eric (and the rest of that fucking family) swinging from the end of a bed sheet in a cell in Sing Sing.

Actually... I would like to see Eric punished... truly punished. I think his cellmate should be Cokehead Jr. - it would be like the oddest production of Mice and Men EVER!

well they can't be cellmates. BLOTUS Jr won't rape Eric - and isn't that what we're really after?