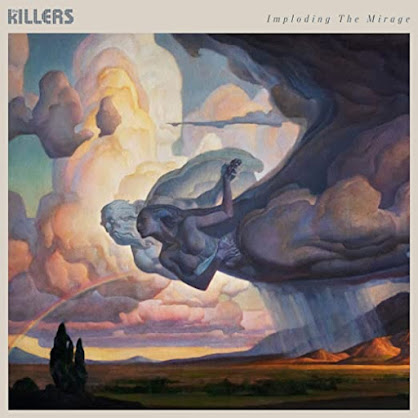 The Killers have a new disk out.  Like so many others, Imploding the Mirage, was to be released months ago. But shut downs made it difficult to mix, as sound engineers weren't able to work and such - which seems weird to me, since most anymore, music is digitally recorded and files could be shared electronically.

Like with most any release these days, they are preceded by 3-4 songs. There seems to be no reason or rhyme to what type of songs make that cut. More often than not, to me, they are rarely the better tunes. So does it really entice one to purchase a disk based on those?

Now, I like the Killers, but with my friends, I am in the minority. They were still one of the best concerts I've attended. But I also know that with about half their disks, I end up liking them much more in later years than upon their immediate release.

If the same method holds, it might take quite a while for me to feel Imploding the Mirage.

The disk starts strongly enough with "My Own Soul's Warning", which is about as traditional of a Killer's song there is. The whole thing sounds familiar and comfortable. It's possibly the best thing on the disk. Oddly, or not, it is the only song written solely by lead singer Brandon Flower.

But the disk is not consistent and it loses me far more often than it should.

Let's start with "Lightning Fields". At best, it's a mediocre song. What it really is, is a missed opportunity. It's almost like, how dare you have k.d. lang featured on a song and then misuse her presence? She doesn't show up for almost two minutes and then use melodies and a mix that just make her seem......bland. IF she is singing after that initial part she's in, she is so lost in the mix and over-production it isn't even funny. And it is all melody too. Was there even a thought to doing anything at all with harmonies?

"My G-d" is something Jim Steinman might listen to and cringe thinking, "even for me, this is all a bit too much" in terms of production. Think about that one for a second.  And while I like "Running Towards a Place", the opening and some of the music seems semi-ripped off from Dan Fogelberg and Tim Weisberg's "Power of Gold" or maybe some song from Orleans.

"Fire in Bone" is almost a non-starter. The song isn't horrible, if you can get past the horrible opening, which is only 30 seconds but seems so. much. longer.

"Caution" is a decent song. It seems slightly better than when I first heard it, so that's a plus. Honestly, it's Lindsey Buckingham's guitar work at the end for which I stick around. It's some of his best guitar work in two decades.

And there lies one of the problems here. The Killers, as of late, seem to be the Brandon Flowers and Ronnie Vannucci Show, but I think they took a bigger hit than they'd admit when the band lost guitarist Dave Keuning. Mirage is the first album of which he has sat out completely, and while I wouldn't think one might miss that presence, it turns out you do.

The songwriting is key too. And "Warning" might prove that Flowers writes better by himself than with 10 others, or sampling another nine ("Dying Breed" while decent, it pulled from Kraftwerk and others - as it took 11 people to write one song).  This proves to be exhausting and uneven.

The title song is just bad. It just is. They rhyme 'mirage' with just about anything but 'decoupage'. Someone really got use out of their rhyming dictionary.

Imploding the Mirage might grow on me. Might. But I suspect it will rank much lower in the Killers catalog, maybe right under Day & Age, but above Sawdust.