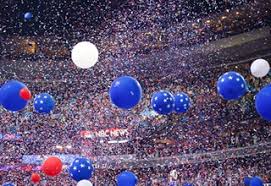 Is anyone watching the DNC convention?  And if so, why?

I'm not being a dick (well........), I'm genuinely asking. There is zero surprise at who the nominee will be, or even the speakers.

Obvi, I'm fine with Michelle Obama talking anywhere, anytime. But Bill Clinton? We already have a pedophiliac president who buds around with Epstein and Maxwell, did we need another one?

And Hillary?  Honestly - why?

There were dozens of young democrats who should be the face of the party, not AARP.  And with either Clinton you're just giving fodder to the other side.  They get to call her 'loser' and they're not wrong, as she's not at 1600 Pennsylvania Ave. There will be no press on her message, just reaction. It's an act of futility.

Honestly, in an election year like this one, what is the point of a convention? I'd be hard-pressed to believe there are undecided voters in this election. You can talk about your platform all you want, but it really just comes down to BLOTUS vs Not BLOTUS.

And why have a convention when there really wasn't even a primary season?  No, not because of Covid, just the DNC shoved Biden on us. If almost any other candidate was sitting in the White House right now, I'm not sure I'd vote for Pappy Joe - that is how much the DNC pissed me off.

As it is, I'm voting for Harris.

DNC has been either top of, or second item on, our news bulletins here - and at a time when our own Prime Minister is doing one of his all too regular vanishing acts, as he does whenever there's a particular crisis, like now for students getting marked-down exam results which determine refusal/acceptance for their chosen university. But no one's even asking "Where the hell IS Bojo?" We're just tired of it. I shouldn't be at all surprised if he's taking some days off to play golf.

I agree that the on-screen appearance of the tainted Bill Clinton is a gift to the 'other side' at a time when the Dems can ill afford own goals - and his missus too has accumulated considerable unwanted baggage. But we all know that had they not been invited to make an address then their absences too would have been exploited by an administration who will pounce on anything under the sun which just might give them an edge, even if it's momentary.
From here on I dread something happening to Biden before election day, which seems still just too far in the distance - some illness, incapacity or possibly even worse. We all saw early this year, pre-Covid, at some evangelical-type rally, a group of seven or eight religious crazies huddled around a sanctimonious-looking BLOTUS (trying his best to look humbled - but impossible!) and praying to God Almighty that he win this year's election. Now it would be just like God - or Fate - to strike Biden down with something, anything, in the coming weeks and for it to be jubilantly declared "See! God is listening - and on OUR side!" (Cheeses H. Cripes!)
Anyway that's my own personal nightmare scenario. May it remain trapped inside my own fevered imagination.

I'mma not watching, but picking the highlights from other sources.

bill & hill are looking old and past their prime. and white. the DNC needs more people of color and younger souls if it wants to continue.

joe is not my first choice either, but the alternative is a fucking disaster.