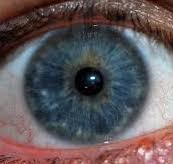 So, I had a late optometry appointment scheduled at the beginning of sheltering in place last March. Clearly, that didn't happen.

I was already about a year overdue, so now it just delayed it even more. And my eyesight wasn't getting any better. I mean, I don't think it's horribly worse, but my glasses weren't cutting it - mostly due to buying on-line and letting some tech pseudo guess where the transition line should be.

Anyhooo.......I finally got my exam this last week. A full one, including dilation. Crud. Hate that.

The doc seemed thorough. To the point where the light exam after dilation seemed to go on far far too long.  Crud.  Hate that.

It seems I have Pigment Dispersion Syndrome.

PDS, as I'm calling it, happens when pigment rubs off of the back of the iris of the eye when the fibers supporting the lens rub against it. This pigment is deposited in the trabecular meshwork of the eye, where the fluid drains out.

When he said 'fluid' and then 'pressure', internally, I'm like "fuck".

This could be a precursor to a form of glaucoma.

The literature says this condition is rare (duh, that is my M.O.), occurs mostly in Caucasian males (double duh!). I break the mold with the fact that the on-set usually comes in mid-20s to early 40s. I'm looking at that fucking timetable in the rearview mirror.

So right now, there is nothing to do. We will watch, wait and see.

"See" - being the optimal word.

It’s the getting there that’s supposed to be fun, right?

bad news that
my father has glaucoma; no fun having eye problems.