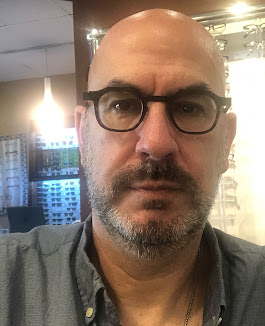 My eye exam last week turned into a retail outing, as you might expect.

My last pair, I might have had on a piece of furniture where I sat then leaned on them. They might be fixable, but possibly not. So I've been wearing pairs that are older and well, less seeable.

Blobby hates shopping, but kind of digs eye glass shopping. I don't wear jewelry or watches, so glasses are kind of my...vice? Is that even the right word?

Just recently - and by that, I mean yesterday - I finally gave away (read: donated) five pairs of old glasses. They'll match them with someone with my near and far sightedness and astigmatism.

It is the first time I've given away any frames. Though the lenses were old and useless to me, I was unable to part with them. 710 says I'm the Imelda of eye glasses. I fear in a few years, if not already passed, that cultural reference will be lost. Probably right along with Lorena Bobbitt.

So I kind of like to go glass shopping, though I fear I am not good at it. I act on impulse, not necessarily practicality. I think I might also be highly influenced.

Bob, at the place I usually got glasses, had a way of steering me to things he thought I would like - and I did - but were always the most expensive thing in the store. Now that he is gone, his daughter Cathy has the same "gift".  I usually end up regretting my choice a few months in. Or I get bored easily. Or both.

I couldn't tell her what I liked and didn't. It's not that cut and dry for me, though no longer can I wear 'round' frames. It doesn't look good with my Dr. Bunson Honeydew head. So not having a clear view is a problem for her, as with Covid, she has to wipe down every frame we touch.

Cathy did a great job picking out some cool frames - including the ones in my pic, which oddly was the first pair I put on.

In this pic, they look black. They are not. They are brown with minimal tortoise flecks in there. I like them a lot. At least for now. But they are crystal clear........and I can see, far and near.

Magic, for a guilty pleasure they are excellent. Crystal vision, can’t place a value on that!

Looking good. I have held onto a couple of frames and had distance only TV watched lenses put in them - the only thing Prada I will probably ever own.

(sings) I can see clearly now, the rain has gone...

nice glasses. and I got every cultural reference you posted.