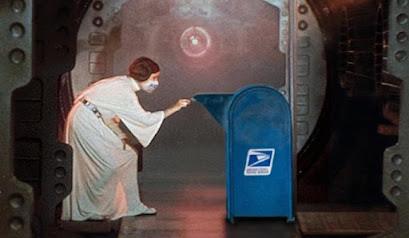 Honestly - help me fill in that fucking blank.

Truth be told, my stomach has kind of been in knots over this fucking USPS bullshit.

Honest to fucking g-d, how is this even happening and how can nobody stop this?

Mailboxes being pulled up off the street. Some 671 mail sorters taken out (or slated to be taken out) of post offices in every single state - save Alaska. Machines that each sort 30,000 pieces of mail per hour. Or - 20,130.000 PER HOUR.

What. The. Actual. Fuck.

Maybe this is true. Maybe not.

Even IF the cease and desist is true, I still take great issue with this entire scenario. The guy BLOTUS put as head of USPS owns between $30M and $75M (they can't narrow that down?)  in stock with XPO Logistics, a large transportation and logistics company that does business with the USPS for the last 25 years. Clearly a conflict of interest.

What I don't get with this whole thing:  there is no evidence, one way or the other, that mail in voting benefits Democrats more than Republicans. I'm not saying it doesn't - but I can't find any stats on that, and you know there have got to be some.

Is it possible that fucking up the postal system would actually backfire on BLOTUS?  One could hope.

What I do know about the "alleged" slow down of the mail:  Caremark sent my prescriptions on August 11th. They have not arrived and currently unable to track them. So................yay!

So, if there are enough delays in Veteran benefits or old people medications, that fat fuck might have just lost two groups of would be voters.

Oh, it cannot hurt to email the Board of Governors for USPS:

My opinion or I’ve heard , there are more democratic voters than Republican, thus this massacre!

my spouse gets 2 of his 20 drugs by mail. amazon uses the USPS to deliver packages. and PA is leading the states lawsuit against the dump. we are waiting for our ballots now (arriving next month, we are told). as soon as they arrive, they are going back!

From what I've heard, if you don't trust _____ and his lackeys, with the mail, you can return your mail-in ballot to your Registrar's, or the Board of Election's, office in person.