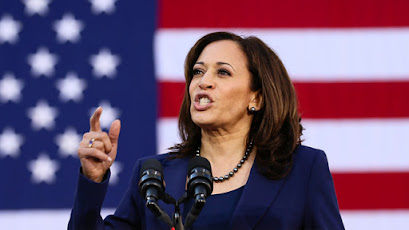 Pappy Joe finally picked his running mate. And it's about whom 93% of folks thought it would be three months ago.

Harris seems like a solid choice. I mean, I hope all this time, Pappy Joe & Co were vetting the fuck out her. You know, like Steve Schmidt didn't do to Sarah Palin. Or that Clinton's team found the most forgettable man on the planet to be her VP.

I've said it before - when it was down to Biden and Bernie, I thought both should have announced their VP picks then. In the highly manipulated primary "season" (count them: three primaries before almost all "dropped out") I knew I'd be voting for the bottom of the ticket. Pappy Joe isn't living another eight years. He just isn't. And if so, I don't need another fucking addled man in the Oval Office.

Yes, I heard BLOTUS bad-mouthed her already. Shocking!  {not}

The bigger shock is that it took him an hour after announcing it to do so.

Harris almost makes me want to watch the VP debates.

I still can't see doing it.

Of course a big takeaway is: Maya Rudolph has a job for the next three and a half months to eight years.

Some days we think we have it all figured out! Some days we just need to be Democratic Believers!

I too hope there was a thorough vetting; the dump MUST BE GONE on 11/3!

_____ trotted out one of his "nasty" women comments, but then dodged the reporter who asked why he'd given thousands of dollars to her campaign in 2013 ... or why Ivanka did as well.