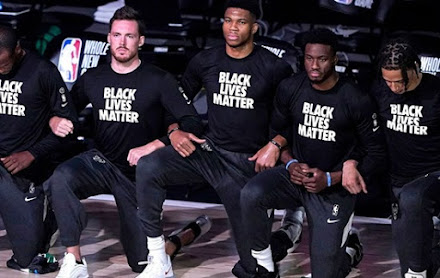 I couldn't decide to write about the 17 dipshit with a semi-automatic weapon that will hopefully be spending what little life he has behind bars. I'm hoping the constant rape pushes him to hang himself.

Yes. I am THAT uncaring. At least of that turd.

I'm also not here to give him any notoriety.

I will give it up for the Milwaukee Bucks.

Ok. Let's just get this out front. I didn't know Milwaukee had a fucking basketball team, let alone the name of one. I am not a total dolt when it comes to sports, but I'd have to run through a fuck of a lot of cities before ever assuming Milwaukee had a team that wasn't the Brewers.

But good for the Bucks for boycotting game 5 of their play-offs. It's not every day that a team no one knew existed halts a season no one understands.

But fuck - the ABA has BLACK LIVES MATTER on their temporary Orlando basketball courts. They sure as fuck had better halted their playoff games for what is going on in Kenosha.  I don't know they would have if the Bucks just hadn't said they weren't taking the court.

I mean, my g-d, Roger Goodelle apologized to Colin Kaepernick this week. Sure, four years too late. Four years and being blackballed too late. But I suppose it's a start.

And for historical sake, I will mention that this is all going on during the GOP convention, so you know they're loving this. ....but in all the wrong ways.

We are at a breaking point, Donald Trump is too Stupid to understand Watts and a million other indignities to blacks. If defeated we may heal, if not he will be defeated by racial issues!

I am so fucking sick and tired of Black people getting murdered by the fucking police for no fucking reason other than they are Black.

MLK would be appalled that Black people are still dying for nothing.

white trash ignorant dump supporters betta RECOGNIZE that THEY are now the minority in this country!

Very proud of the NBA and the WBA... hit 'em where they will pay attention. Take their sports away. I just wish the Minnesota Twins had been as woke. What really got to me was how complicit the Kenosha police were in the killing of those two protesters. And that trainwreck of a press conference? They need to clean out that whole department... reeks of racism and authoritarianism. Freaking fascists. But, it's Wisconsin, so... yeah. What else do we expect?