I've Got a Great Idea 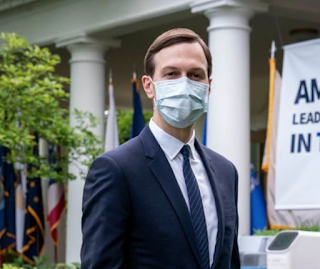 Let's not kid ourselves, kids.

Jared Kushner's alleged misstep of saying that it's not ruled out that the 2020 presidential election could be postponed is no misstep - or accident.

At best, it was a test balloon.

The reality is, it was a warning shot across the bow.

....and BLOTUS used the most unlikeable messenger, because, well.......no one (and I do mean NO ONE) gives two fucks about Kushner. So if he succeeds, great. If he fails, tough shit.

If you dare go back and read any number of random political posts of mine from January 2017, you will find multiple references of me stating that there is no way BLOTUS is ever going to leave office willingly - even if actually losing the election.

I believe I stated earlier this year, with the delays and questions regarding state primaries, what this sets precedence for the November election.

Yes, Twitter and Hillary Clinton is up in arms, but as we've seen in the past, that condemnation has done little (read: nothing) to stop this administration. The Constitution is nothing to these folks. Nothing.

Now, I'm doubtful Pappy Joe can be BLOTUS, but I think we're about to find out he's not even going to get a chance.

I hope you're wrong, blobby. we are teetering on the edge as it is.

A lot of us thought that BLOTUS might just refuse to leave after losing, but it'd be just like him to attempt to do what no one else has even contemplated up to now. And as things are, I wouldn't like to bet that he wouldn't get away with it. It's got way beyond one's worst nightmares