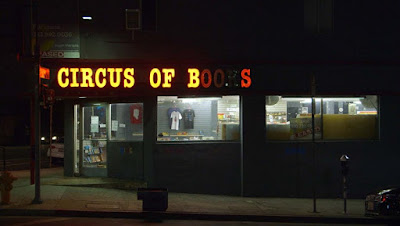 We have had to rethink our movie goal and mode.

I have decided to keep the goal to 18, which means, we are behind. The mode part I addressed early on in the year with watching A Marriage Story and the Two Popes on-line. Those could have been two-offs, but I decided then, it would be acceptable.

I don't know what movie theaters will look like in the future. After the arrival of the virus, but before lock downs, our art theater was limiting the number of folks into their theater. The big chains, which had assigned seating, was closing off every other seat for distancing.

So we have Netflix, they have movies, but save HBO, we don't really have other streaming services. I supposed there is pay per view. IFC has a deal of like $7 / month that has original content movies, some of which look really interesting, so I might be looking into that.

Still, this last weekend, we watched a documentary, Circus of Books. It was recommended by two different friends, both name Jon. No H.

The documentary is made by their daughter.

The film could be one of a first-hand family documentary, where the parents were seemingly unaware of their helping to bring the gay community together in a certain aspect; or one of LGBTQ-centric of a time of business, government censorship, AIDS and acceptance.

This is a problem with the film.....it doesn't know what it wants to be, or should be. The filmmaker is too close to some of the subjects to have any objective, or to ask the good, tough questions - or to have a fully formed conversation on film with her brothers. Most any conversation with her mother (who is arguably the lead figure here) is fraught with both parties talking over each other constantly.

The Masons (the family running the bookstore) saw this as business / commerce. Nothing else. Selling lube and dvds was no different than selling washers and dryers.

Larry Flynt makes an appearance, as he was the Mason's biggest distributor and one of his first. Jeff Stryker does too. I told Jon C, that "I've seen everything he's done........and everyone he's been in........a quarter at a time".  It got a chuckle......you know, over text. Stryker is surprisingly somewhat thoughtful and smart about the couple and what they did and during the 80s.

I think more poignant moments were interviews with the folks that worked for the couple in the store. They skimmed on the stories of acceptance after families betrayed them, or how a bookstore became a refuge for so many gay men in a town as big as L.A. .  I would have liked to seen more of that.

Circus of Books is good, but I think with a little work it would have been so much better.

I'll file this at back of mind where, I have little doubt, it'll soon be forgotten about.
Slight pang of regret that 'Marriage Story' never opened here before the lockdown - and now it's very unlikely it'll be shown in cinemas at all when they [i.e. the ones that haven't gone bankrupt] start up again.
I'd been expecting to be missing cinema visits something dreadful but, oddly, that's not so at all. Don't read or listen to reviews of those new ones that have gone straight to Netflix or DVD. Haven't even been watching oldies on TV. Film time has been replaced by reading [fiction] time. Mutatis mutandis!

I'm telling you, I'm not sure you missed a thing with 'Marriage Story'.

The above comment is NOT from me [if you hadn't already guessed].

LOL. I had. But it's going away in a minute.

I’ve been watching Call My Agent! - yes there really is an exclamation mark (hey, they’re French) on Netflix. Maybe it’s just my mood but it’s fun. Take a look.
JP