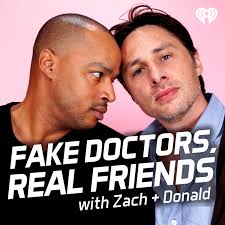 Scrubs - save maybe the last season and a half - was one of those shows that just made me laugh.  Considering there were nine years of this, those are still pretty good numbers.

For anyone who has ever worked in a hospital, Scrubs was a far more realistic representation than ER (I suppose, as I never watched it) or St. Elsewhere (though they had the same phone system as THE Ohio State University Hospital).

The series, at times, evoked comedy, drama, pathos, but never dread. Not all episodes were stellar, but I don't recall any truly bad ones (ok, maybe a few in the last season and a half - which almost doesn't count since a lot of the series regulars were gone by then.)

Who would know that the fake Becky (Sarah Chalke) from Roseanne would be so great in this, I mean, since she was so bad in Roseanne and kind of be milquetoast in her run on How I Met Your Mother. Eliot was kind of a perfect role for her .

So, of course, when Turk and JD started their own podcast, Fake Doctors, Real Friends, I was hopeful. Zach Braff and Donald Faison are good (best?) friends in real life. Braff has even cast Faison in the movies he's directed.

I'm only a few episodes in and already I need to take them to task for not having a director or editor - though I don't think most podcasts do.  The shows range from 64 minutes to 97 !!!   .....for a TV episode that was 23 minutes long.

Fake Doctors, Real Friends suffers from the same thing as the Office one, and to a much lesser extent from the West Wing version:  too much inside jokes and stories that are hilarious to those who were there, but bare little, if any, relevance to those listening.

Clearly JD and Turk are having a great time with these, which is great and kind of infectious, but I'm guessing 710 would liken this to how our friends and I finish each other's sentence and heard stories about stuff he never experienced first hand, so it's amusing............to a point. Then it just becomes some reminiscing where the other parties aren't really needed at all.

That said, this might change a bit (?) when they bring on guests, be it former cast mates or guest starts. There were 180 episodes, so I'm guessing I won't hit them all (I know I wont), but I can self select certain shows based  on whomever the guest may be.

I hope they find their stride and edit these a bit - far too long for me. And I want to like them because I liked the show so much. Here's hoping they don't fuck it up long term.
Posted by Blobby at 12:07 AM