Are We There Yet ? 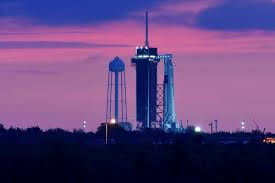 I'm taking a day break from riots, racism, and politics.
No worries, you know I'll get back to them.
This last week I actually scheduled some meetings around the expected launch of the SpaceX manned Falcon rocket
Due to weather is was scrubbed, so I went back upstairs to work. Bummer.
The new launch time was yesterday. We kind of cut Shep's hike short so we could be home to watch the launch live.
It went off without a hitch.
I'm not so patriotic that I have to have the U.S. actually be the ones to send folks into space, but it was an ok thing - even though tons of folks watching were unmasked. Only the drivers of the Teslas out the launch pad seemed to have them on.
BLOTUS and VP BLOTUS were in attendance. Right next to each other too. Where's a good sharp shooter when you need one?  Or at least debris from an exploding rocket. I turned the channel after the astronauts were up in space. I didn't want to see either of those two talk, nor did I want to see that once genius, now loon, Elon Musk speak either.
I'll get in trouble for saying this out loud - yes, more than the inevitable knock on the door from Secret Service for the sharpshooter comment - but I bet those two motherfuckers were hoping for an explosion of some kind, just to change the narrative of anything black related.
You only think I'm kidding about that last paragraph. I am not.
The Falcon Heavy is one of the most, if not the most, powerful rocker that has three boosters. That seems that it has 3x the ka-boom power, should it fail.
Fail, it did not.
About 10:00 this morning, barring any complications, the rocket will dock with the International Space Station.
We'll have to wait a month or so to see how it comes to earth.......and in what shape that might be.
Song by: Pat Metheny Group
Posted by Blobby at 12:07 AM

It was a nice launch, one of the few times I wished I still lived in Florida. I also turned it off to escape listening to the loons. The NASA administrator was praising the grand Poba, that was more than I could take.