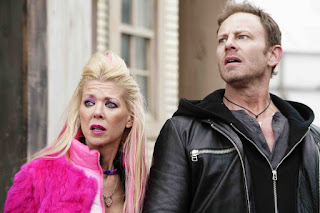 I don't know what to say about Handsy Pappy Joe.

Ok Ok, I know that Tara Reid and Tara Reade are not the same person. Unfortunate name coincidence though.

Clearly, unlike everyone else on social media, I have no idea what truly went on way back when. Neither Pappy Joe, nor Tara and I are that close. We don't confide in each other. Nor was I there. But when push comes to shove, I generally believe the woman who was assaulted.

I've made no secret here about not being a supporter of Pappy Joe as the nominee - which technically, he still isn't - so I'm not going easy on him here.

True, whatever Pappy Joe did with Reade or some of the other women he got handsy with was not exactly grabbing her by the pussy, like BLOTUS brags about. Yet, that doesn't quite make him passable.

Yet, the Biden lovers are seemingly giving him a pass - even an NYT op ed piece: I Believe Reade, but Still Voting for Biden.

See.......when it was BLOTUS, or Cavanaugh or the probable pedophile from Alabama (Moore), these same people were (and rightfully so) up in fucking arms.  Now? Not so much - should it serve their purpose.  Oh - but they don't touch on any of that. Ever.

If they want to be honest, they'll just have to say, "yes, Joe is kind of scum, but hopefully not more than BLOTUS, and even if he is, he'll hopefully make better political decisions." then fine. But honestly, you'll have to shut up about the sexual behaviour of the others. It can no longer be played.

That all said, one would have to believe that the Obama campaign had to have vetted the shit out of their VP choice. Maybe they did. Maybe they found this shit out and deemed it didn't matter - or maybe it didn't exist at all.

Not to stereotype (though it does save time), but Pappy Joe from an era where touching a woman here and / or there wasn't the standard. I'm not saying it is right; I'm not condoning it. I'm just saying that will be the justification of just about anyone letting this slide.

IF the democrats are 'better' than the republicans, than they have to actually act better - and that might mean ditching Pappy Joe for someone else. If not, then shut the fuck up about BLOTUS and his infidelities. There is plenty of other shit of which he is guilty, but pick Joe and shut your pie hole.