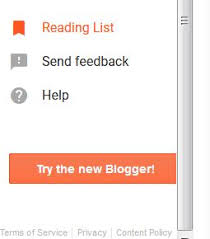 While I don't abhor change, there are sometimes it is not welcome - which is almost always with my blog.
Years ago, an "upgrade" with my hosting site lost every single image prior to 2010.  Months of working with them, which they claimed wasn't a problem, resulted in squat.
Blogger has updated one time before and while it ended up working out, there were pangs.
Blobby does not like pangs.
So for the last few months, Blobby has been ignoring the 'try the new Blogger'.  I didn't want to. So I didn't.
A few days ago, I got an email pretty much saying, "like it or not, we're moving you to the new blogger in two week".  Crud.
So, pretending like I had some semblance of control, I hit the 'try the new Blogger' link.
I like and don't like the new Blogger.
Shocker.
For you, the reader, you should see no difference. Yesterday's post was the first one done on the new editor.
The editor itself is not as intuitive as one would think. I like intuitive. Honest to g-d, I think it took me seven minutes to find how to create a new post.  Don't even get me started on my scheduling of the post and the time suck that was.
While i haven't played around with it for too too long, I can't find the place where I can write in HTML, which sometimes I actually have to do to get things to work the way I want them to work.
However, I think I'm going to like the upgraded analytics. I'm not going to say I think they're more accurate, but the way to get and view them seems better.
I totally get that using the old editor might not truly have been better, but it was comfortable because it was about eight years of a constant.
For sure I anticipate troubles. I don't know what they'll be....or when, but mark my words.......
Song by: John Waite
Posted by Blobby at 12:07 AM

I tried the "new" blogger a while ago. It wouldn't let me access my reading list, the blogs that I read regularly. The links did not work. So I abandoned the "new" blogger for the "classic." The problem went away. Now, like you and countless others, I'll be forced over. I hope they fixed that bug. The look and feel will take a while to adjust to, but what else is new?

I'm just pretending that I know what you're talking about :)

I've been trying to use the 'new blogger' for a couple of days now, so I can get used to it before it's too late and we're given no choice. I must say it's really quite tiresome. Can only hope they iron out the kinks before D-day, but not holding my breath.