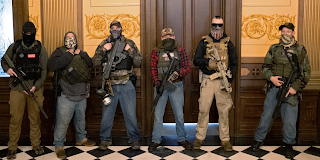 I have touched on douches like these folks in the past.  "Very fine people" as BLOTUS called them the other day, as he did with neo-nazis down in Charlottesville a few years back.

You see, BLOTUS needs these folks, and I'm not talking just for the votes.  ....but more on that in a bit.

I've called these folks both 'terrorists' and 'cowards'. Both still hold true.

I'm all for them the right to deny science. But then they should deny science to themselves and their families when they take ill from Covid.

I only think 4% of them are wearing masks because of possible airborne transmission of coronavirus. The coward part is that they don't want to be identified. Pussies on every level, should they also be afraid of contracting a disease.

While it's been covered before, I will mark it here for the record - had they not been white, they'd never have made it this far into the Michigan capitol without being shot to death. THIS, is white privilege.

The sad thing is, black people would be shot asserting their First Amendment right to assemble, even without AR-15s. White folk, with body armor, masks and semi-automatic machine guns?  Go right in, thank you.  (I'm assuming Michigan's open carry includes the state house, where in Ohio, that is not allowed.....which is also hilarious, as you can take guns into daycares, but not where the lawmakers pass said laws.)

The stupid fucks who say, lock down is unconstitutional is hilarious too. I don't know that amendment, because I don't think getting to the Lego store is 'assembly'. But IF they were so worried about the constitution, where were they when #moscowmitch held up a supreme court nominee?  THAT is unconstitutional.

But we know they pick and choose what they think is right (which is another post for another day!).

....if this is how people act due a limitation on going outside, what the fuck do you think is going to happen should BLOTUS lose in November ??

This Michigan (and other states) is a minor rehearsal for what is bound to be a total shit show.

Every fiber of my being tells me that BLOTUS will not only legally try to contest the election should he lose, but he will call on his minions with their weapons. I don't believe he'll go out without a literal fight.

If you think the country is divided now............I'm just waiting for it to really break open. Michigan seems to be just the precursor.

Song by: Camper Van Beethoven
Posted by Blobby at 12:07 AM

If things weren't so serious as they are, most of us on this side of the pond [and I really do mean 'most'] could be rolling our eyes to the sky and dismissively saying "Thank Heavens we're not at that stage!" Actually my feelings are wondering how did it ever come to this? It's not that long ago, long before Covid, since some were forecasting that if BLOTUS loses in Nov - and, regretfully, I still think it's an 'if' rather than a 'when', now that his only 'trump' card left is to play the racist anti-Chinese one, "China wants you to vote for Sleepy Joe" - there's going to be riots in the streets [most likely with guns] especially when he refuses to go, as he will. It's become a living horror show. So very, very sad - and so particularly scary for all sensible Americans.
And, btw, it was several decades ago when I started to observe that those who shout the loudest demanding that people should be allowed to do and say what they want in the name of 'Freedom', turn out to be the most censorious of all - only allowing what THEY themselves approve of.
I'm seriously starting to think that surely now is the time when those Four Horsemen will make their long-delayed appearance.

it's sad to see what we have become as a country. ronnie raygun should have NEVER recognized the evilgelicals/right-wing pukes. WHY can't we be like canada?

Ain't nuthin' civil about these people!


Hi everyone! Hope you are doing well. I just came across your website and I have to say that your work is really appreciative. Your content is exceptional. The ease to use your site is remarkable. We also have some tools that can help you in upgrading your site. Here is the link to our website reverseimagesearch.org