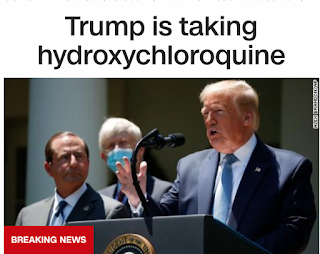 I think it goes without saying: I don't believe a word that comes out of his mouth, or anyone in his administration.

Honestly, if any of them said the sky was blue, I'd doubt that too.

But for someone who gets tested every day {allegedly}, thought the coronavirus was a hoax {not allegedly} and won't wear a mask, why in the fuck would he take a drug that is totally unproven for Covid-19?

Let's say it IS true he's taking it. That "man" probably has Lupus and the drug (I'm not spelling the name out) is to help him with that. I mean, he is in his 70s. Statistically he has to have health issues - not that he's ever gonna come clean on them.

The other reason for him taking it is probably a lie that he is taking it:  Michael Cohen got paid $1.3M from Novartis - the maker of the drug - for access to BLOTUS. The Novartis CEO met with BLOTUS at a dinner in January 2020.

And supposedly, though not confirmed, Rudy G purchased $2M in Novartis stock in February. And let's face it, stocks have taken a dive these last few months. Rudy has dirt on BLOTUS, so even mentioning he's taking it probably gets Rudy some coin.

While I put none of this past this dick of a president, I'm still going with #1 - Lupus.

The most distinctive sign of lupus — a facial rash that resembles the wings of a butterfly unfolding across both cheeks.

Like we'd know, but that could explain all his make-up.

Confusion and memory loss are symptoms too - so, that would explain a lot.

Few questions beg an answer as obvious as "What have you got to lose?"

perhaps the fat fuck will take a dirt nap...soon...

The most effective sum up of he who must not be named, He's just an old, fat, evil fuck. .....and there's no cure for that." Thank you for putting it so sucinctly

Amen. If there was a shred of fairness in the world, we all know what SHOULD happen in this case. But it won't. Because evil wins out time and time again. Those of you that still believe in a god? Jeez. Don't waste your breath...