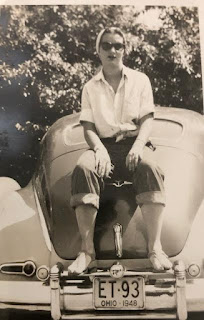 I haven't actively, or consciously, been avoiding Mother's Day, however semi-subconsciously I may have. I've seen some ads turning them almost immediately, as I assumed it was a week from now.  710 told me otherwise.

This is almost the lasts of the firsts. In a month or so, we'll have the last; a year since my mother died.

Like with my dad, I think of her daily. Something reminds me of her. We have enough of their house items that it would be hard not to have some daily reminder. I'll never think of their table and chairs as "ours".

It doesn't happen often, but now and then I think of something, or see something and go, "I should call her and tell her....", and then, obvi, don't. I can count on three fingers how many times she's made it to my dream cycle.

In the last week, two of her former work colleagues and her maid of honour check in to see how 710 and I are doing. All included memories of her in their correspondences. I'll be honest, I wasn't quite sure if they were doing it for me, or for themselves. Or both. None of it wrong, of course.

We are preparing for her stone-setting. The headstone was to be completed two months ago, but you know - Covid. While the company was shut down, the stone workers, must have kept going. The day they opened back up, the stone was delivered to the cemetery. They still need a few weeks to do the foundation for it - as the stone is substantial.

While it sounds harsh, I'm glad she is not here for this Covid shit. I do believe the isolation would have killed her faster than the disease itself. The inability to see family or friends would have been monumental for her.

So, of course I am sad she isn't here, but glad we are close to closing out our year of mourming.

a year already; may she live long in your heart.
I like that pix of your mom; she looks like she was having fun.

that was a lovely prose; thank you for sharing it.